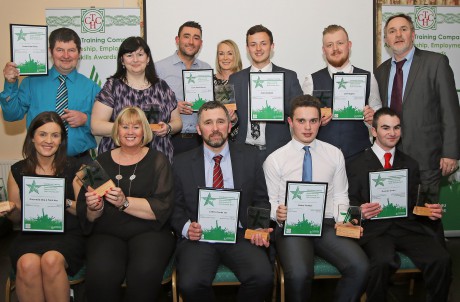 Individuals and employers who have excelled in vocational learning and training programmes delivered by one of Wales’ leading training providers were recognised at an awards ceremony last night (Thursday).

Twenty-four finalists from across Wales were shortlisted for the new Cambrian Training Company Apprenticeship, Employment and Skills Awards 2017, which were presented at the Royal Welsh Showground, Builth Wells to coincide with National Apprenticeship Week.

Cambrian Training Company, which has offices in Welshpool, Holyhead, Colwyn Bay and Llanelli, has launched the awards to celebrate all that is great about training, apprenticeships and skills in Wales. The company delivers apprenticeships to 1,200 learners and works with around 400 employers across Wales.

One North Wales business had double reason to celebrate at the ceremony, as Clive and Gail Swan of Swans Farm Shop, Mold collected the award for Micro Employer of the Year while their employee, Peter Rushforth, 21, won the Higher Apprentice of the Year Award to cap a fantastic 12 months. Rushforth won the WorldSkills gold medal and Meat Trades Journal Young Butcher of the Year in 2016 and has just returned from a Hybu Cig Cymru Scholarship visit to America.

The award for Jobs Growth Wales Outstanding Individual of the Year went to Thomas Owen, a production operative at Mainetti, Wrexham, while the Foundation Apprentice of the Year was Young Welsh Butcher of the Year Sam Hughes, a butcher at Brian Crane Butchers, Caerphilly, which was runner up for the Micro Employer of the Year.

The Apprentice of the Year Award went to Danny Foulkes, trainee project manager, at construction and civil engineering company EvaBuild, Newtown, runner up for the Small Employer of the Year Award, which went to Gwynedd Skip and Plant Hire, Caernarfon.

Cambrian Training Company’s managing director Arwyn Watkins congratulated the finalists and said they were all winners. “We work with some great employers and learners throughout Wales as we deliver a range of apprenticeship, skills and employment training programmes on behalf of the Welsh Government,” he added

“These awards celebrate the achievements of those who have exceeded expectations during their engagement and commitment to training and skills programmes and shown a unique approach to training and development and demonstrated initiative, enterprise, innovation and creativity.”

He said the awards were timed to coincide with National Apprenticeship Week and the Positive Powys Pathways event held at the Royal Welsh Showground earlier in the day, which attracted 2,000 pupils from secondary schools and more than 130 employers across Powys.

He stressed how important it was for pupils to have the information to make the right career choices at the age of 16. “Most haven’t got a clue what they want to do, other than go to university and spend their parents’ money,” he said. “The cost of staging the Positive Powys Pathways event was £30,000, the equivalent of one bad decision by a pupil and their student loan.”

He went on say that National Apprenticeship Week was designed to celebrate apprenticeships and the positive impact they have on individuals, businesses and the wider economy. “Apprenticeships offer a unique package of support and experience, bring down long term unemployment and are one of the most practical and cost-effective ways of building a skilled workforce,” he added.

He also spoke about the Apprenticeship Levy, which is being introduced in April and will be paid by 770 employers in Wales who have a wage bill more than £3 million.