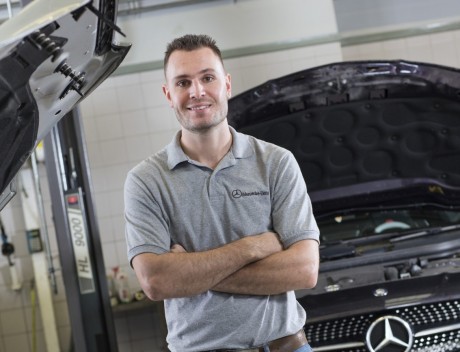 The Welsh Government is encouraging apprentices, learners and employees from Wales to compete in the UK’s largest national vocational skills competition, WorldSkills UK 2016.

An initiative to recruit entrants from across Wales to compete against the most talented youngsters in the UK has been launched this month. The campaign features a selection of former WorldSkills competitors including Dean Jones, a medal winning apprentice from Swansea.

Dean, talented car workshop manager from Waunarlwydd, says he has the largest vocational skills competition in the country to thank for securing his dream job in the Caribbean.

Dean Jones, 27, who now works for Mercedes-Benz in the Cayman Islands, first competed for WorldSkills UK in the Automotive Technology category in 2007 and is now encouraging other Welsh youngsters to follow their dreams and sign up for this year’s competitions.

After finishing an advanced modern apprenticeship with Mercedes-Benz in Swansea at the age of 19, Dean was prompted by his manager to apply for a WorldSkills UK competition and has since travelled the world, winning a gold medal in the 2008 EuroSkills competition in Rotterdam, and a Medallion of Excellence at WorldSkills International in Calgary, Canada, in 2009.

Dean said: “I’ve always wanted to live in the Caribbean and WorldSkills made it possible. I’ve always been interested in the automotive industry and the more I learned, the more I realised I had a strong talent for repairing and diagnosing motor vehicles.

“Each successful competition helped me build a good level of confidence and has also given me the chance to travel from a really young age – something which has impressed my employers, helping me to progress quickly in my career.”

Since competing at WorldSkills, Dean has secured jobs as a workshop supervisor for a Prestige dealership in Nigeria – where he helped open a prestige dealership, teaching locals the correct protocols and procedures for diagnosing and repairing modern motor vehicles – and in Barcelona for McLaren where he was responsible for testing prototypes at a purpose built ground.

Dean continued: “WorldSkills has been an amazing opportunity that has allowed me to turn my passion into a career, but has also involved a lot of hard work. To stay on top of the training involved, it’s really important to have a strong passion for what you do. WorldSkills has played a big part in getting me where I am today and I can’t emphasise enough to youngsters to get involved.

“I never expected the competition to take me this far, but now I can’t imagine what my life would have been like if I hadn’t applied. It was an unforgettable experience to represent the UK at the World finals of my skill set. It was such a big event and something that will stick with me forever. I would encourage anyone thinking of competing to go for it, just give it a go, step outside of your comfort zone. It’s a great experience and you never know where it could take you.”

“He is inspiring other young talented people in Wales to make the most of the opportunities WorldSkills presents as it gives them the chance to travel the world, create great contacts, develop skills and adds to their employability.”

WorldSkills is the largest international skills competition in the world. Held every two years, the competition sees around 1000 young people, aged 18-25, come together from all over the world to compete for medals in up to 60 different skills. By participating in WorldSkills UK Competitions, competitors and tutors are able to share best practice in apprenticeships and vocational teaching, raising standards on an international scale.

Visit www.worldskillswales.org to find out more or to register online before the closing date, April 7th 2016.