Jayne Williams has been recognised with a national award for her passion for learning and development which has made her the “go to” person for apprenticeships within HM Courts and Tribunals Service (HMCTS).

Jayne, 58, from Newport, was named Higher Apprentice of the Year at the prestigious Apprenticeship Awards Cymru 2022. 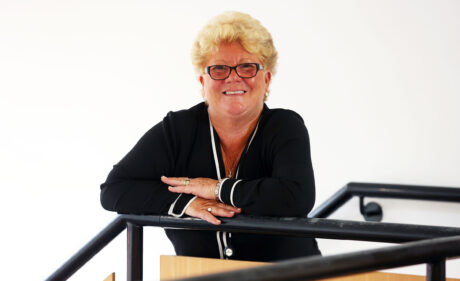 Due to her successful apprenticeship journey, she has been promoted from a court clerk to learning delivery officer for HMCTS across the UK. She is following in the footsteps of her late grandmother who passed her first ‘O’ Level at the age of 65.

Delighted with the award, Jayne said: “I am over the moon, to say the least. I am so proud that I took the opportunity to do an apprenticeship and I wish I had done one when I was younger.

“It has been totally life changing. I am more confident in my personal and work life and the apprenticeship has opened so many doors for me. It has made me realise that I am good at what I do and want to inspire others to do an apprenticeship to reach their full potential.

“If I can do an apprenticeship at my age, anyone can do it.”

The awards showcased the outstanding achievements, during unprecedented times, of employers, apprentices and work-based learning practitioners.

Highlight of the year for apprentices, employers and work-based learning providers and practitioners, the awards are organised by the Welsh Government and supported by the National Training Federation for Wales (NTfW) and headline sponsor Openreach.

Jayne is now the “go to” person having been the first HMCTS employee to achieve a Higher Apprenticeship (Level 4) in Advice & Guidance, delivered by training provider ACT.

She now wants to do a Chartered Institute of Personnel and Development qualification or a Higher Apprenticeship (Level 5) in Learning & Development.

In the past year, whilst completing her Higher Apprenticeship, she helped train 690 HMCTS colleagues via online workshops and has been offered a wide range of jobs within the service.

As part of her Higher Apprenticeship, she enjoyed a six-month secondment in a trial training and facilitation project which proved so successful that HMCTS has now employed a permanent learning support officer.

Economy Minister Vaughan Gething congratulated Jayne and all the other award winners and finalists. “This Welsh Government has ambitious plans to make Wales an engine for sustainable, inclusive growth and give every young person the best possible start in the world of work,” he said.

“I believe apprenticeships are vital to this vision and that’s why we are investing £366 million over the next three years in the delivery of our apprenticeship programme. I am determined we do all we can as a government to help deliver the long-term economic benefits our young people deserve.

“We are a small country but we have big ambitions, and our aim is to foster a culture in Wales where recruiting an apprentice is the norm for employers.”
The Apprenticeship Programme is funded by the Welsh Government with support from the European Social Fund. For more information about recruiting an apprentice, visit:
gov.wales/apprenticeships-genius-decision or call 03000 603000.