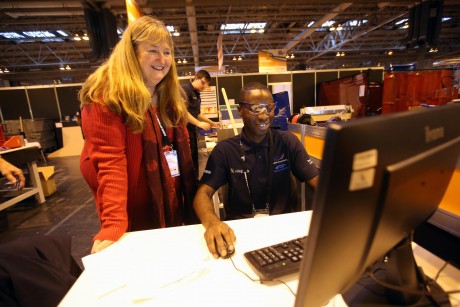 Ten young people from across Wales – including a brother and sister from Llanelli – have been named the ‘best in the UK’ at the national final of a major skills competition.

Bruno Forkuoh, 23, and Elizabeth Forkuoh, 19, from Llanelli, were both awarded gold medals in their respective categories at the WorldSkills UK final, which took place at the prestigious Skills Show in Birmingham from 19 to 21 November.

Elizabeth, who was awarded the Gold medal in Restaurant Service, and Bruno, who won gold in the Manufacturing Team Challenge category, were among the 45 Welsh competitors who won a total of 10 Gold, 7 Silver, 12 Bronze and 16 Medallions of Excellence, a record achievement for Wales. 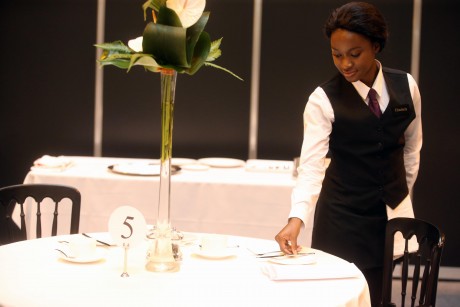 The selection for Squad UK also took place at the event, with 20 Welsh competitors – including Bruno and Elizabeth – named as part of the squad of 153 that will potentially represent the UK at WorldSkills Abu Dhabi 2017.

WorldSkills UK Competitions inspire young people and adults to be ambitious in their pursuit of skills to the highest level and are the highlight of The Skills Show. During the final at the NEC, over 650 of the UK’s most talented apprentices, employees and learners battled it out in over 50 competitions in their chosen skill ranging from plumbing and cookery to web design and floristry.

The youngsters were given the opportunity to show off their ability in a series of intense demonstrations over 20 hours of competition.

To earn their place in the WorldSkills UK final, each learner was required to compete against his or her peers from organisations across the UK through a series of regional competitions.

This year saw the largest ever Welsh contingent at the Skills Show, with a total of 82 individuals chosen to represent Wales – the highest regional proportion of the 650 competitors.

Deputy Minister for Skills and Technology, Julie James attended the Skills Show this year. Commenting on Wales’ success in the WorldSkills UK final, she said:

“It gave me great pride to be able to attend the Skills Show and witness Wales’ success in the WorldSkills UK competition first-hand.

“The fact that a record number of learners, apprentices and employees were selected to represent Wales in this year’s final was already an achievement in itself, but for the team to bring home so many medals and to have so many individuals selected to join the UK Squad is a huge credit to their hard work, talent and determination.”

Six of the Welsh winners took part in the Inclusive Skills competition set up by Natspec (The Association of National Specialist Colleges) that enables young people with a disability or learning difficulty to participate in events like the Skills Show.

Barry Liles, Skills Champion for Wales, congratulated the Welsh competitors on their success.

“The fact that our young people are able to compete with and win against the very best across the UK – and indeed the world – is testament to the impressive level of skills we have here in Wales. Last year, four Welsh youngsters succeeded in progressing right through the ranks of the WorldSkills competition and got to travel to Sao Paolo, Brazil for the world final.

“I hope that the success that these talented individuals have enjoyed will inspire them to go on to become highly skilled employees as well as convincing other young people of the importance of developing their own skills.”

WorldSkills International takes place in cities around the globe and is the largest international skills competition. The next WorldSkills Competition takes place in 2017, in Abu Dhabi. WorldSkills is supported by the Welsh Government and the European Social Fund, to promote the importance of a highly-skilled workforce, aiming to boost high level skills in Wales.