Apprentice from Cilgarren turns up the heat 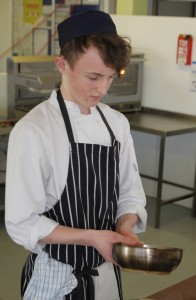 A 17-year-old from Cilgarren has won gold in the professional cookery final of a national skills competition.

Skills Competition Wales is a series of events backed by the Welsh Government, designed to celebrate vocational skills and create a highly skilled Welsh workforce for the future.

With Olympic athletes training hard for the imminent games in Rio, Sam Everton is just one of 78 Welsh youngsters who have been perfecting their skills in a bid to win a medal. Across a range of vocations from graphic design to patisserie, these skilled champions, like Olympians, may go on to challenge competitors from other nations.

Sam, who is currently studying his Level 3 NVQ Diploma Advanced Professional Cookery at Pembrokeshire College, competed against other youngsters from across Wales. Finalists completed a series of cookery challenges within a three hour time period, which included the preparation and cooking of a starter, main course and dessert for two people.

As this is Sam’s first ever competition he was thrilled to have won.

Sam said: “It was really nerve wracking, we were given a month to come up with our menus and practise as much as we could. To start I made seabass with vegetable chowder and deep fried cockles, followed by sous-vide chicken breast stuffed with mushroom and truffles and a chicken liver faggot on a potato rostie. For dessert I went with an apple bavoir.

“We were marked in two sections on preparation which involved filleting, butchering and vegetable preparation and then then on our cooking and presentation. I chose these dishes to really show off my skills I’ve learned in college and at the Grosvenor Hotel, in Cardigan where I work part time.

“I want to complete my level three and go to university to study food science. The experience was amazing and I really pushed myself to create high quality food in the time they gave us. I’m looking forward to hopefully getting through to the next stage and practising hard to show the judges what I can do.”

Supported by the European Social Fund and the Welsh Government, and run by a network of colleges and work based learning providers, a total of 33 local Skills Competitions will be taking place between February and April, in a range of sectors from forensic science and car mechanics to web design and nail art.

Sam may go forward to represent Pembrokeshire College in the Professional Cookery WorldSkills UK heat, with the aim of potentially representing Team Wales at this year’s Skills Show in Birmingham in November. He may then be eligible to compete for a place in the squad which will represent the UK at WorldSkills in Abu Dhabi in 2017.

Deputy Minister for Skills and Technology, Julie James AM said:

“Year on year, the level of talent at Skills Competition Wales seems to be continually improving. These events encourage healthy competition and are a great way of recognising the fantastic talent that we have in our country.

“We wish Sam and all the other finalists and winners the very best of luck, not only in the next round of the competitions, but also in their future careers.”