Talented web developer encourages others to compete in WorldSkills UK 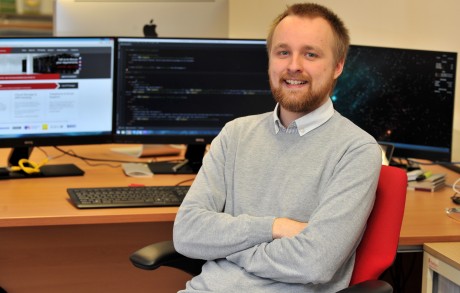 The Welsh Government is encouraging apprentices, learners and employees from Wales to compete in the UK’s largest national vocational skills competition, WorldSkills UK 2016.

An initiative to recruit entrants from across Wales to compete against the most talented youngsters in the UK has been launched today. The campaign features a selection of former WorldSkills competitors including David Bowen, a medal winning web developer who attended Coleg Sir Gâr.

The 23 year-old first competed in WorldSkills UK in 2009, and has since gone on to travel the world representing Wales in Squad UK, winning gold and silver medals in France and Australia in the web design category.

David now works as a web developer for Ridgeon Network Ltd based in Leicester, and continues to act as an ambassador for the WorldSkills competitions, training candidates for the national cycles, and travelling to China as part of a roadshow to promote vocational skills and apprenticeships.

David said: “Competing in WorldSkills has been a great way to boost my confidence and employability. I don’t think I would have secured the job I have today had it not been for the competition. The whole process gives you the chance to gain experience and helps you stand out from other applicants when applying for jobs.

“WorldSkills has given me the chance to develop my web design skills, which I now use every day as part of my job. It’s incredible to say I’ve travelled so much at such a young age, and I really enjoy sharing my knowledge and experience about the competition with others and encouraging them to get involved.”

Deputy Minister for Skills and Technology, Julie James, is also urging young people to register for WorldSkills UK. “David is the perfect success story and shows how far these competitions can take you. WorldSkills competitions provide people the chance to compete against the best in their industry on a world stage.

“He is inspiring other young talented people in Wales to make the most of the opportunities WorldSkills presents as it gives them the chance to travel the world, create great contacts, develop skills and increase their employability.”

WorldSkills is the largest international skills competition in the world. Held every two years, the competition sees around 1000 young people, aged 18-25, come together from all over the world to compete for medals in up to 60 different skills. By participating in WorldSkills UK Competitions, competitors and tutors are able to share best practice in apprenticeships and vocational teaching, raising standards on an international scale.

Visit www.worldskillsuk.org to find out more or to register online before the closing date 7 April 2016.