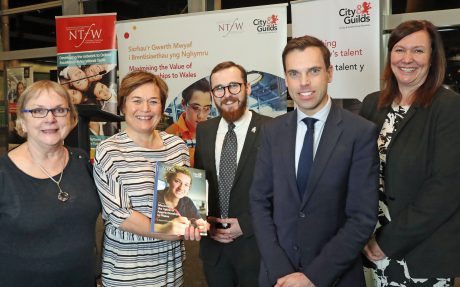 Speakers at the launch of the ‘Maximising the Value of Apprenticeships to Wales’ at the Senedd (from left) joint author Nicky Perry of Beyond Standards, Kirstie Donelly, group managing director of City & Guilds / ILM, DigitalMe, Jack Sargeant, AM for Alyn and Deeside, Ken Skates, Minister for Economy and Transport and Sarah John, NTfW chair.

A new report that calls on the Welsh Government to implement changes to the country’s successful apprenticeships programme to make it world class, has been welcomed by the Minister for Economy and Transport, Ken Skates.

“This report makes a great contribution to our thinking and consideration of future policy development,” he said at the launch of the thought-provoking, independent report, ‘Maximising the Value of Apprenticeships to Wales’, at the Senedd in Cardiff.

“For all of us the challenge is to create a responsive apprenticeship system that has social justice at its heart.”

In response to the report, the City & Guilds and the National Training Federation for Wales (NTfW) has called on the Welsh Government to consider introducing its own skills levy for Wales, to establish a lead body to govern the quality of apprenticeships and to clearly define the purpose of apprenticeships.

The report was commissioned by City & Guilds and the National Training Federation for Wales (NTfW) with support from the City & Guilds National Advisory Committee for Wales to look at ways of further improving the successful Apprenticeships Programme in Wales. It’s the first report of its type specifically focused on apprenticeships in Wales.

Mr Skates told the audience that he was delighted to have skills back in his portfolio, having previously been responsible for apprenticeships when he was Deputy Minister for Skills and Technology.

He said Wales had a “vibrant” apprenticeship programme and he was confident that the Welsh Government would surpass its target of creating 100,000 apprenticeships during its term of office. “We are not just chasing numbers, however,” he stressed. “Quality is at the centre of the programme.”

Referring to the apprenticeship levy, he said the Welsh Government would not repeat the mistakes and failures made in England. “Instead we will drive quality relentlessly,” he pledged.

Report authors David Sherlock, CBE and Nicky Perry, MBE, of Beyond Standards, were asked to research and analyse the depth and breadth of the Apprenticeships Programme in Wales and how it benefits individuals and the Welsh economy.

Nicky Perry said: “Apprenticeships in Wales are stable and solid and they could carry on like that forever. What they are not is excellent.”

She identified a need to improve quality, to reduce the number of apprenticeship frameworks for professions and to review the apprenticeship levy because it was not doing as intended.

“We think that the country could have by far the best apprenticeship programme in the UK and that should be your goal,” she added. “You have the wherewithal, energy and inspiration to do it.”

Former engineering apprentice Jack Sargeant, AM for Alyn and Deeside, who sponsored the report launch, said: “This is a timely report and an opportunity for the Welsh Government to consider how they continue to maximise the impact of apprenticeships as we head into the next industrial revolution.

“I personally know the positive impact that apprenticeships can have and they are a particular passion of mine..”

NTfW chair Sarah John said: “The NTfW recognises that significant progress has been made in recent years to the Apprenticeships Programme in Wales and that the programme is in a constant state of transition. However, we also recognise that more can be done to improve the quality of the overall programme if we are to continue to meet the needs of individuals, employers and the wider Welsh economy.

“The direction of travel for apprenticeships in Wales is sound, but the pace of change needs to be rapidly improved.”

Kirstie Donelly, group managing director of City & Guilds / ILM, DigitalMe, said the report and the recommendations made jointly by City & Guilds and the NTfW were designed to help build an exemplary apprenticeship system for Wales.

“We strongly believe there are great foundations to build on and we have developed a number of recommendations and calls to action for the Welsh Government which, if implemented, will set Wales on the path to success,” she added

Jeff Protheroe, the NTfW’s director of operations, said: “We will now share this report with AMs and political parties and move this agenda forward. Let’s make apprenticeships in Wales truly world class.”

Jane Russell, people manager for Morrisons, said: “I am really looking forward to reading this important report and seeing what we can take from it for our business. Out of the 23 shops in our region, 15 have apprentices and we hope to take on more in the future.

“We shall be promoting stories about our apprentices in store during National Apprenticeship Week in March.