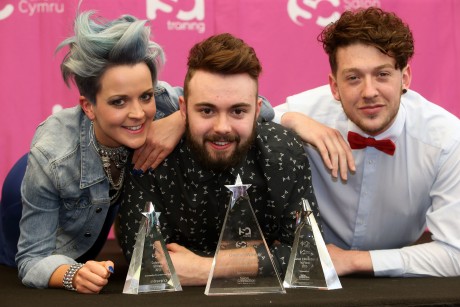 Talented 19-year-old hairdresser Joel Williams from Pontypool, who is planning to emigrate to Australia later this year, ensured that he is leaving Wales in style after winning the nation’s premier hairdressing and beauty event on Sunday.

Joel, who works for D. K. Sebastian in Cwmbran, was declared overall champion at Salon Cymru, which attracted more than 160 competitors from across Wales, the English border counties, Spain and Poland to the SWALEC Stadium in Cardiff.

Making his competition debut at the dynamic annual event, organised by ISA Training, the largest independent hair and beauty training provider in Wales, Joel won the blow dry level two and colouring categories to add to the overall title.

“I entered Salon Cymru to get competition experience and didn’t expect to win anything because the standard is so high,” said Joel, who was cheered on by his mum, Karen, and salon colleagues. “My hard work seems to have paid off.

“As my mum was a hairdresser, I grew up around hairdressing. I must confess that it wasn’t my first choice career but I love the job and the training and support that I get from D. K. Sebastian is amazing. They keep drumming into us the more effort you put in the more you will get out of it.

“I train at home about six nights a week because I enjoy it and don’t consider it as work. I want to be at the top of my job.”

Joel said he hopes to emigrate to Brisbane in September, having fallen in love with the country whilst on holiday there. “One of the main reasons why I’m emigrating is the opportunity out there,” he said. 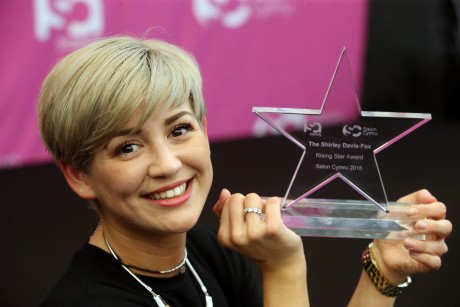 The rising star award went to Vincenza Butchers, 21, an apprentice from Guys and Dolls @ Alex’s in Llanelli, who was also shocked by the award. “I was packing my bags to go when they announced my name,” she said.

“I can’t put it into words what winning this award means to me. I don’t have much self-confidence and am quite a nervous person, so this award is a really big boost.

“My ambition is to carry on improving and to either teach hairdressing or to have my own business one day.”

Students from Poland and Spain, who are involved in a learning exchange with Wales, also made their mark in the event, as Spaniard Aitana Sanchez Garcia Hidalgo, 23, won the fantasy make-up category in her first competition.

“Awesome,” was Aitana’s reaction to winning. “I love Salon Cymru very much. It’s much more organised than I had expected.”

Aitana was with a party of learners from Tarragona in Spain, Poland and Turkey who were returning a visit, which has seen learners from Bridgend-based ISA Training gain experience of the hair and beauty industry in those countries.

Two workmates at One A Hair and Beauty, Caernarfon, both went home winners. Ellie Dwyer, winning for the third year running at Salon Cymru, claimed the make-up level two category while her model for the previous two years, Ruth Elen Lloyd, 19, competed this time and won the hair up level two title.

Marilyn Lowrie, 31, from Coleg Cambria, Wrexham, shed tears of joy when she won the make-up level three category. “I wanted to do make-up when I was younger but never had the confidence,” said who lives in Bagillt.

“My five-year-old daughter, Nyla Mae, is my inspiration and she has given me the confidence to go for it. I would like to go to make-up school in Manchester and my ambition is to have my own make-up brand one day. I just want to work hard and be successful.”

Bethan Maria Evans, 21, from Coleg Llandrillo Rhos-on-Sea who works at Copa, Bethesda at weekends, won the hair up level three category. “It feels amazing to have won,” she said. “It’s nice to get the recognition for all the hard work that I put in for it.

“I have received so much help and support from by tutors and bosses, which is very much appreciated.”

Winner of the cutting level three category was Sinitta Dee Western, 23, from Coleg Gwent, Cross Keys who works for Evolve Hair Maendu, Newport. “Winning this competition is a boost for my confidence and I would like to specialise in cutting in the future,” she said.

Jake Anthony Morgan, 18, from Pembrokeshire College who works at The Room, Johnston, near Haverfordwest, won the barbering level two on his Salon Cymru debut.

“I brought quite a difficult model, who has Afro Caribbean hair, to try and impress the judges and it appears to have paid off,” said Jake, who lives in Cardigan. “I have been barbering since I left school at16 and it feels amazing to have won because Salon Cymru is an outstanding event.”

“Absolutely incredible” was the reaction of Harriet Young, 22, from Jazz Hair and Beauty, Magor, after winning the popular avant garde competition. “I haven’t won anything in my life before and I think my hard work has paid off,” she said.

“I started researching avant garde work as soon as the competition was announced and we have been working on it for months,” said Harriet who works at her mum’s salon. “It’s really nice for people to see my work and I would like to work for tv and films in the future.”

Around 500 spectators attended Salon Cymru, which featured a sell out 90-minute masterclass by inspirational hairdresser Patrick Cameron who declared that the event was much bigger and better than when he last visited four years ago.

New Zealander Cameron, acknowledged by his peers as the international ambassador for long hair, said: “There’s a much better vibe, more people and the standard of competition seems to be much higher this year.

“I travel the world educating hairdressers and showing them the latest trends. One thing that I am very passionate about is training and I think it’s incredibly important to drive the industry forward.”

He appealed to salon owners and qualified hairdressers to share their skills and knowledge with young people entering the industry so that they learn how to set, cut and blow dry hair.

Returning to the event, this time as a judge, was 2009 Salon Cymru overall winner Josh Rees-Hole, now artistic director at Urban Retreat, the salon in Harrods, London. He praised the high standards achieved by competitors and, like Cameron, revealed his passion for training and developing talented young hairdressers.

Delighted ISA Training’s managing director Berni Tyler said: “I didn’t believe Salon Cymru could get any bigger and better but it has done. The professionalism and standards achieved never ceases to amaze.

“Introducing European students this year has given competitors something to think about and they worked very well. Next year, I would like to see open barbering and avant garde competitions to raise the standard even higher.”