Weatherman Owain blows up a storm with special effects company 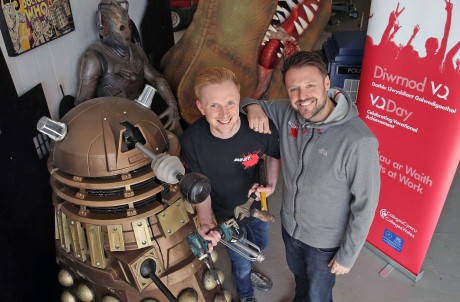 Popular BBC Wales weather forecaster Owain Wyn Evans had his sights set on a career behind the camera before he landed a job as journalist and television presenter.

This week he jumped at the chance of trying out a job with award-winning special effects company Real SFX in Cardiff, who work on hit series including Dr Who, Coronation Street, Casualty and Sherlock, and got ‘shot’ with a realistically bloody special effect.

Owain agreed to become a special effects trainee for the day under the guidance of Real SFX’s managing director Danny Hargreaves to highlight the value of vocational qualifications in the lead up to the VQ Awards in Wales on June 9 and national VQ Day the following day.

The VQ Awards are organised by the Welsh Government’s Department for Education and Skills (DfES), the National Training Federation for Wales (NTfW) and CollegesWales. The awards are part funded by the European Social Fund.

VQ Day is a national celebration of people who have achieved success in vocational education in Wales. Vocational qualifications have never been more important to the economy and the individual; they deliver the trained, talented employees businesses are crying out for and ensure young people have the skills needed to succeed in education and work.

Real SFX knows all about the value of vocational qualifications, having been named Small Employer of the Year in last year’s Apprenticeship Awards Cymru. The company, which has won BAFTA Craft awards for the past two years for its special effects on Dr Who, recognises the value of training and developing a skilled workforce to achieve business success.

Owain’s career route has not been plain sailing. He originally opted to study in university when he left school but found that the theatre design course was not for him. He ended up training as a journalist with BBC Wales, presenting children’s programmes on S4C before becoming a TV weatherman.

“I quickly realised that university was not for me and I didn’t want to waste time,” he said. “The career path that I would probably have gone down would have led me to behind the scenes stage production or specialist lighting.

“Having the chance to work with Real SFX was amazing because this is the sort of exciting work that I love. I enjoyed getting a close up look at the explosive special effects that I was shot with.

“My favourite part was seeing all the equipment and getting Danny to talk me through all the things they use. I had a smoke machine as a child when I was a nightmare as I was always smashing things up.”

“I am also a supporter of lifelong learning. Last year, for example, I did an Open University course on meteorology to improve my knowledge and it has definitely helped me with my job.”

Founded in 2008, Real SFX specialises in atmospheric, fire, explosives, mechanical rigs, model making and soft props for TV, film and the events industry. Employing a team of 10, with a further 25 freelancers travelling from around the country, the company has offices in Cardiff, Pinewood Studios Wales and Manchester as well as a base in Scotland.

As the company endeavours to employ more local talent, this number of commuting freelancers is likely to be reduced.

Safety around live special effects is paramount for the business that has developed a specific apprenticeship programme in creative and digital media. Three apprentices have been recruited over the past three years and there are plans to take on two more this year.

“The apprenticeship programme is embedded into the Real SFX business plan and with the opening of Pinewood Studios Wales and the continued Welsh Government support for the sector, there is huge potential for apprentices to grow with us,” said director Carmela Carrubba.

“As the special effects industry is relatively new in Wales, there is a skills gap, so it’s important that we build our own workforce. The reason why we like the Creative Media qualification is that it gives the apprentices an insight into the whole industry and we want to be a leading representative as a special effects company in the creative industry.”

An initiative established by independent education charity Edge Foundation, VQ Day supports the aspiration that vocational qualifications, which are not just for young people, should achieve parity of esteem alongside other educational routes.

The VQ Awards in Wales help to showcase individuals and organisations that have raised the standard of the services they offer as a result of vocational qualifications.

There are two award categories: the VQ Learner of the Year and the VQ Employer of the Year. The winners will be revealed at an awards ceremony to be held at St David’s Hotel, Cardiff on the evening of June 9, the eve of VQ Day.