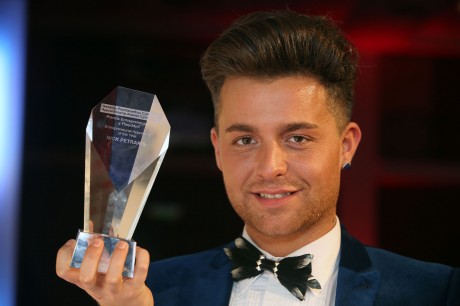 Nick Petrakis with the Entrepreneurial Apprentice of the Year award

Welsh hairdressing entrepreneur Nick Petrakis, whose inspirational story helped him become Foundation Apprentice of the Year in 2012, has added another national award to his list of honours.

This time, Nick, 27, co-owner of ‘nickymichaels’ salon in Cardiff, won the Entrepreneurial Apprentice of the Year at the at Apprenticeship Awards Cymru, organised jointly by the Welsh Government and the National Training Federation for Wales (NTfW). The high profile award ceremony was held at the Celtic Manor Resort, Newport.

“Absolutely amazing,” was Nick’s reaction to winning the award. “I want to be role model for the next generation to show that anything is possible if you work hard. I am very proud of this award, which I think is an even greater achievement than last year.”

He added that he was also delighted that his training provider, ISA Training of Bridgend, had also won the Apprenticeship Provider of the Year award.

Vocational training has paved the way to a successful career, which has involved international travel for Nick, who has now realised a lifetime ambition to open his own salon.

Having left school with no qualifications at the age of 13 when his father died, he started full-time vocational training as a hairdresser with ISA Training, who have guided him every step of the way.

He achieved hairdressing qualification by the age of 16 and has completed Foundation Apprenticeships in hairdressing and beauty and achieved the A1 Assessors Award. Next up, to support his business, is a NVQ level four in management.

Having worked in London and Florida, he established ‘nickymichaels’ with partner Michael Howard last October and business is booming. They now employ five staff and plan to double the size of the salon to create 12 work stations and a beauty room to meet customer demand.

“Having been hairdressing for 15 years, I have constantly improved through vocational training and this has allowed me to create my dream salon,” explained Nick.

“It has been amazing time since opening the salon and I haven’t looked back as the business has evolved quickly. I believe I am a positive example of entrepreneurial success through vocational training and I would be honoured to continue to be an ambassador for apprenticeships to inspire and motivate others.”