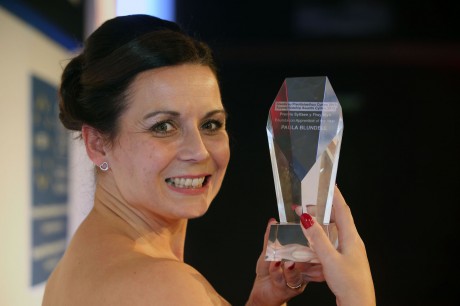 Paula Blundell with the Foundation Apprentice of the Year award.

Paula, a 40-year-old mother of one from Bryn-Y-Baal, near Mold, was named Foundation Apprentice of the Year at the Apprenticeship Awards Cymru 2013, organised jointly by the Welsh Government and the National Training Federation for Wales (NTfW). The high profile awards ceremony was held at the Celtic Manor Resort, Newport.

“Winning this award reaffirms that my career is taking the right path,” she said. “I love my job and it’s the kids that spur me on. I can’t believe that I was chosen because the calibre of the other finalists was so high.”

Paula, who works at Ysgol Mynydd Isa, near Mold, has completed a Foundation Apprenticeship for Supporting Teaching and Learning in Schools through Wrexham IteC and is now working towards an apprenticeship.

“I want to show other people who have a family to look after that it is never too late to learn,” she said. “I never thought I could do it, but I have and I am moving on to a higher level now. It has opened up a whole new world to me and I am doing a job I love. I am looking forward to learning in the future and throughout my career.”

Paula confesses that she never found a job that she truly enjoyed after leaving school with a handful of GCSEs at the age of 16.

Her new career began when she secured a post as midday superviser at her son’s school and started helping out in class. She really enjoyed working with the children and was encouraged to begin a Foundation Apprenticeship.
“Despite not having studied for over 20 years, I thoroughly enjoyed researching and developing my skills and knowledge,” she said. “I love supporting the children and seeing their faces when something clicks for them. It is a great honour to be trusted and I always strive to do my best for them.”