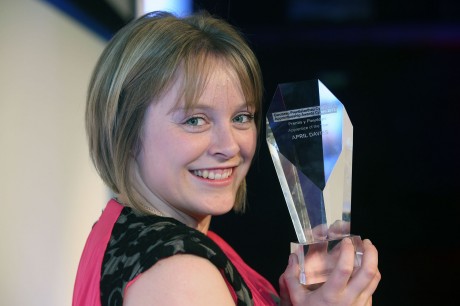 April Davies with her Apprentice of the Year award.

A shining role model for young woman seeking a career in the male dominated farming industry has been named Apprentice of the Year for Wales.

April Davies, 21, from Dolfor, near Newtown, received the award at the Apprenticeship Awards Cymru 2013, organised jointly by the Welsh Government and the National Training Federation for Wales (NTfW). The high profile awards ceremony was held at the Celtic Manor Resort, Newport.

“It feels amazing to have won this award and to be recognised for doing something different to what girls usually do,” said April. “It’s a wow moment knowing that I have managed to achieve something as big as this.”

Not only did April face the barrier of coming from a non-farming background, but she found she was the only girl on her work-based learning course at Coleg Powys (now Grŵp NPTC Group Newtown campus) for four years.

Refusing to let that stand in her way, she achieved a Foundation Apprenticeship and an Apprenticeship in Agriculture. She attended the college one day a week whilst working for farmer Ben Beddoes at Common Piece Farm, Churchstoke and his Dairy Dreams ice cream business.

Her work placement involved getting to the farm sometimes at 5am to help milk the cows and she has been involved in all the other aspects of the business, including using large agricultural machinery and helping to run and promote the diversified ice cream business.
April is now used as a case study by Lantra, the Landbased Sector Skills Council, to attract other young women into the industry.

“Although I knew it would be difficult because I didn’t come from a family farm, I was determined to succeed,” she said. “I have been very lucky to have a placement with an employer who believes in my ability and allows me to use my business and entrepreneurial skills gained at college in both the agricultural and ice cream business.”

In addition to her full time job, she has also set up a small-scale sheep enterprise, which she hopes to develop in the future.