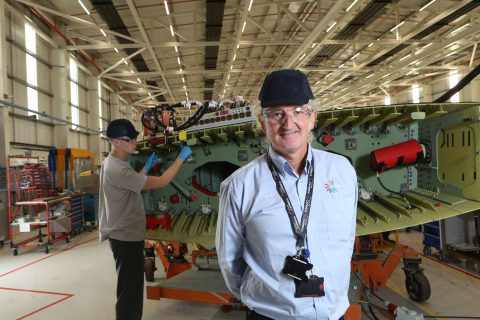 Coleg Cambria’s technical assessor in aerospace and electrical engineering, Tim Robinson, regularly goes above and beyond what is expected to ensure his learners succeed.

Tim, 53, from Flint, has become a key member of staff since joining the college direct from industry in 2009.

Working hard to develop his teaching and assessing skills, he has completed the assessor qualification, an ILM in Coaching and Mentoring, City & Guilds Supporting Adults and Young People with Essential Skills and a PGCE to support the delivery of additional skills workshops.

Tim has had a 100% achievement and retention rate since 2014 and regularly shares best practice with the college’s aeronautical and engineering team. In addition, he has taken part in a European Leonardo project, “Harmonisation of Electrical Installation”, which focused on assessment activities for electrical engineering.

Now he has been shortlisted for this year’s Apprenticeship Awards Cymru. He will be competing to become Work-based Assessor of the Year at the prestigious awards ceremony at the Celtic Manor Resort, Newport on November 9.

Jointly organised by the Welsh Government and the National Training Federation for Wales (NTfW), the coveted awards are supported by media partner, Media Wales. The Apprenticeship Programme is funded by the Welsh Government with support from the European Social Fund.
Thirty star employers, learners and learning providers from across Wales have been shortlisted for the Apprenticeship Awards Cymru.

An aerospace hand-skills exercise developed by Tim has been used in WorldSkills heats and he has helped adapt an Apprenticeship framework for Airbus UK, which has been adopted by EAL and developed a specialist electrical skills programme for Airbus learners.

Admired by learners for his motivational and supportive approach, Tim has kept many of them from leaving their Apprenticeship when under pressure and their high standard portfolios are often commended by awarding body EAL.

Robert Seiga from Welsh Water, who achieved an Apprenticeship in Electrical Engineering, said: “Words like fantastic, brilliant and incredible just don’t cut the mustard as Tim’s support and help was miles better than these words.”

Vicky Barwis, Coleg Cambria’s director of work-based learning, said: “Tim’s commitment to his learners is exceptional and deserving of recognition. He is keen to set an example to his learners that learning is for life and even when they qualify there is always a need for continuous improvement.”

Congratulating Tim on being shortlisted for an award, Minister for Welsh Language and Lifelong Learning, Eluned Morgan said: “Apprenticeship Awards Cymru showcase the success of the Welsh Government’s Apprenticeships and Traineeships Programmes and the achievements of our star apprentices, employers, learning providers and trainees.
“Apprenticeships are a great way for individuals to gain valuable skills and experience while earning a wage and for employers to ensure their workforce has the skills to future proof a business.
“Increasing higher level skills and developing skills pathways that benefit the whole of Wales have never been more important.”