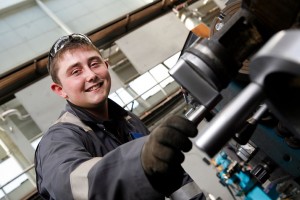 An engineer who impressed his bosses so much during his Apprenticeship that they offered him a permanent job at Wylfa Power Station on Anglesey, has been shortlisted for a prestigious national award.

Bryn Arfon Jones, 21, is one of 28 finalists in nine categories of the Apprenticeship Awards Cymru, organised by the Welsh Government in partnership with the National Training Federation Wales (NTfW).

The Apprenticeship Awards Cymru recognise the outstanding achievements of learners, employers and providers involved in the delivery of quality Apprenticeships across Wales. Apprenticeship and Traineeship programmes in Wales are funded by the Welsh Government through the European Social Fund.

Bryn, an Apprentice of the Year finalist, left school at 16 to study engineering at Coleg Menai and then secured a placement working for Magnox at Wylfa, which led on to his Apprenticeship.

He studied diligently, attending college once a week and achieving his NVQ Level 3 a year ahead of schedule. He now has his Higher National Certificate in Engineering and wants to study for a degree in mechanical or nuclear engineering.

“This Apprenticeship has been great for me,” said Bryn. “I’ve had fantastic support from the team at Wylfa and have learned so many new skills.

“I’m very proud to be part of the maintenance team. I’ve been given the confidence to go out on plant and take the lead on jobs and also to put forward my own ideas to overcome problems. In future I’d like to become a senior production technician and then hopefully a systems engineer.”

Dafydd Edwards, his manager at Wylfa, said: “He demonstrates the positive attitude, keenness and standards that any employer wants to see in an apprentice, or in fact any worker.”

The National Training Federation for Wales is a network 116 quality assured work based training providers with links to 35,000 employers across Wales.