Fairway to success for dedicated Ben 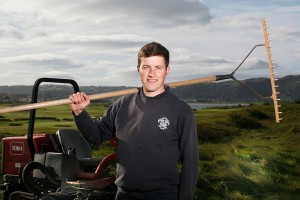 Apprentice greenkeeper Ben Williams, whose promising career is heading straight down the fairway and avoiding all the bunkers, has been shortlisted for a prestigious national award.

Ben, 20, who works for North Wales Golf Club, Llandudno, is one of 28 finalists in nine categories of the Apprenticeship Awards Cymru, organised by the Welsh Government in partnership with the National Training Federation Wales (NTfW).

The Apprenticeship Awards Cymru recognise the outstanding achievements of learners, employers and providers involved in the delivery of quality Apprenticeships across Wales. Apprenticeship and Traineeship programmes in Wales are funded by the Welsh Government through the European Social Fund.

Ben, a Foundation Apprentice of the Year finalist, is described by his work-based learning assessor Jenny Pitts, from Deeside College, as one of the best students she has ever worked with.

“He is so hardworking, eager to learn and wants to get on in life,” she said. “The average time a student takes to complete a Foundation Apprenticeship is 18 months but Ben did it in eight months and he’s already most of the way through his Apprenticeship.”

Having achieved nine GCSEs and three ‘A’ Levels at school, there were plenty of options open to him, but he chose the vocational route when offered a part-time job at North Wales Golf Club.

The post quickly became a full time Apprenticeship and this year he has won an award from Deeside College, was commended in Greenkeeping industry awards and represented the British International Greenkeepers Association at a European tour event held at Wentworth.

Ben, from Llanfairfechan, has achieved a Foundation Apprenticeship in Horticulture Sports Turf – Greenkeeper and aims complete his Apprenticeship later this year.

“I have found a job that I love and one which has provided me with the opportunity to continue with education,” said Ben, a six handicap golfer. “Hopefully, it will help me achieve my ambition of working abroad as a greenkeeper.”

The National Training Federation for Wales is a network 116 quality assured work based training providers with links to 35,000 employers across Wales.