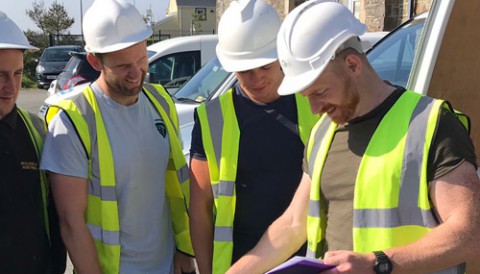 A construction apprentice at Coleg Sir Gâr is preparing for an international work placement where he will be building a fire station for a volunteer crew tasked to fight forest fires.

Dylan Evans from Llangyndeyrn, is employed as a shared electrical apprentice by Cyfle Building Skills and will soon be part of a skilled workforce constructing a new build for 22 firefighters in the Serbian village of Tometino Polje.

Two teams of apprentices from Coleg Sir Gâr and Coleg Ceredigion will be joining Dylan on the work placement later in June.

During his apprenticeship, Dylan has also worked in Kachumbala in Uganda where he helped project manage a new maternity ward for the village and he has supported a community scheme in Zamak, west Serbia.

Returning to college as a mature student following a career in the Royal Logistic Corps, Dylan had aspirations of learning a trade under an apprenticeship programme. He soon discovered that his age and lack of experience was a barrier and applied for the Shared Apprentice Scheme run by Cyfle Building Skills which helped him achieve his goal. He has now completed level two and three of his electrical qualifications and is hoping to progress to a HND or foundation degree whilst continuing his apprenticeship.

Anthony Rees, development officer for Cyfle Building Skills, based at Coleg Sir Gâr’s Ammanford campus, said: “Dylan is an exemplar ambassador for the college and the construction industry and as a result of his Ugandan experience, has been given more responsibility in the workplace by his host contractor.

“Working overseas is an excellent opportunity for our apprenticeships and offers life-changing skills and experience.”

Coleg Sir Gâr’s Principal Fund has provided sponsorship for the trip for all three apprentices.

For more information on how to recruit an apprentice, visit the Apprenticeship section of the Business Wales website or to register your interest in apprenticeships, you can complete our Expression of Interest form.