Nerys Smithwick has not let dyslexia stop her from achieving her career goals at the Celtic Manor Resort in Newport, where she is being promoted through the ranks. 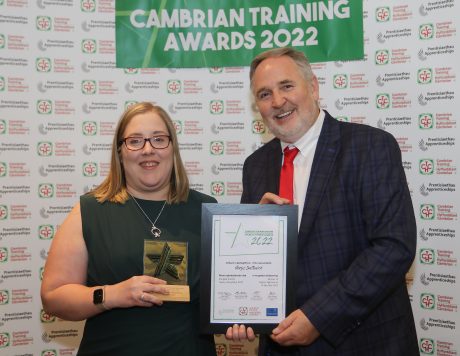 Now 35-year-old Nerys, who lives in Blaenavon, has been recognised for her dedication to learning by being named Higher Apprentice of the Year at Cambrian Training Company’s annual Apprenticeship, Employment and Skills Award.

There was double delight as The Celtic Collection, which includes the Celtic Manor Resort, was named Large Employer of the Year.

Achieving a series of apprenticeships, which have improved Nerys’ skills, knowledge and confidence in the past seven years, has been rewarded with promotions at the Celtic Manor Resort.

She has risen from bar work to room service supervisor at the resort and is described as an inspiration to her colleagues who are also working towards apprenticeships.

Grateful for the support of her employer, Cambrian Training Company and her work colleagues, Nerys said: “It was a privilege just to be a finalist and I never expected to win the award which means a lot to me.

“This award proves that apprenticeships do work. They give you so much knowledge and confidence and I have turned everything that I’ve learned during my apprenticeships into practice in the workplace.”

If you are interested in employing an apprentice, or starting an Apprenticeship with Cambrian Training, please contact us to discuss your options and how we can support you. Email: info@cambriantraining.com or Tel: 01938 555893.