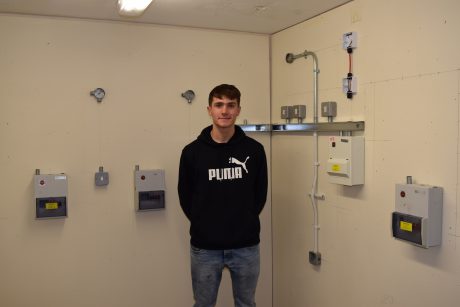 Cardiff and vale College Electrical Installation student Elliott Dix has been crowned as the best electrical apprentice in Wales.

Seventeen-year-old Elliott, who is from Barry, won the Welsh heats of the UK Electrical Apprentice of the Year competition.
“I’m happy to have taken part in such a big competition and a I got a better result than I thought which was good,” Elliott said.

“I was quite nervous. It wasn’t scary but it was challenging, seeing people who are older than you doing the same thing and competing against them. They might have been doing this for years and I’m only in my second year so that was quite nerve wracking.”

Elliott won a selection of tools and will go on to take part in the UK finals of Electrical Apprentice of the Year in March. He said he was grateful to his employer and to Cardiff and Vale College for the support they have given him during the contest so far.

“I work for Woodlands Electrical and they’ve been very supportive, giving me time off to train and letting me come into college if I need it,” Elliott said.

“The College has been supportive as well. My tutor Geoff Shaw made himself available on weekends for my training. Electrical Installation is a good trade. This apprenticeship and taking part in this competition will really help – especially if it goes the right way!”