Apprenticeship Ambassador Catrin dreams of one day opening a nursery

Welsh speaking apprentice Catrin Morgan is fulfilling her career ambition of working with young children and would like to open her own nursery in the future. 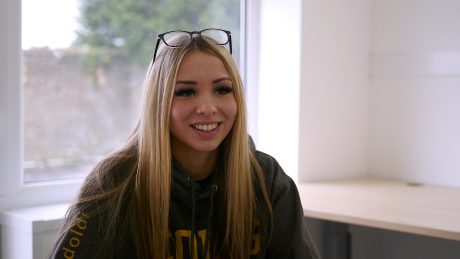 Catrin, 18, froam Pontarddulais, is working towards a bilingual Apprenticeship Level 3 Children’s Care, Play, Learning and Development (Practice through City & Guilds, delivered by Pathways Training, part of NPTC Group of Colleges. She hopes to progress to a Higher Apprenticeship to support her career ambition.

Due to her passion for the Welsh language and apprenticeships, Catrin has been appointed an Apprenticeship Ambassador by Coleg Cymraeg Cenedlaethol (CCC) and the National Training Federation of Wales (NTfW).

“I am really enjoying my apprenticeship at Cylch Meithrin Pontarddulais,” said Catrin, who is also part-time retail assistant for Primark. “I have always wanted to work with children because I love seeing them develop and being able to help them.

“Hopefully, I can work myself up to a higher level and a full-time job in Cylch. My aim is to open my own nursery one day.”

Speaking about her Apprenticeship Ambassador role, she said she is keen to promote the benefits of being an apprentice and bilingualism.

“Doing an apprenticeship is far better because I am able to learn more in one day than in a week in college,” said Catrin. “Being an ambassador, I can help advise others about the benefits of learning in the workplace with an apprenticeship if they are not sure what they want to do.

“I think being able to speak Welsh fluently provides more opportunities and I enjoy speaking and teaching Welsh in the Cylch setting.”

Eira Mainwaring, manager of Cylch Meithrin Pontarddulais, is one of four staff who have either completed or are working towards apprenticeships.

“Catrin has fitted in really well and the apprenticeship is a stepping stone to her future career,” she said. “An apprenticeship gives learners an opportunity to earn whilst doing a qualification and to find out what a job is really like.

Claire Quick, Catrin’s tutor and assessor from Pathways Training, said: “Catrin is in the early stages of her apprenticeship and has done really well in her assessments. She is working with children aged two and three years and is developing her skills and confidence with support from Eira and her staff.”