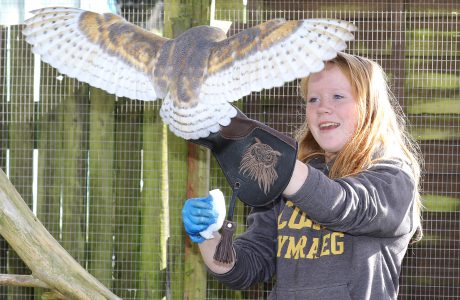 Teenager Celyn Jones has completed her dream foundation apprenticeship working with animals and birds as she builds towards her ambition of becoming a specialist veterinary nurse.

Celyn, 17, from Aberystwyth, will be progressing to an Apprenticeship in Veterinary Nursing – small animal pathway, after recently securing a post as apprentice veterinary nurse with Ystwyth Veterinary Practice in Llanbadarn Fawr, Aberystwyth.

Having achieved 12 GCSEs at Penglais School, Aberystwyth, Celyn was at the point where she had to decide whether to progress to the sixth form or leave to begin a career.

When the foundation apprenticeship came up at a local zoo, which is now closed, she jumped at the chance to earn while she learned, gaining practical experience and skills in the process.

“I have always wanted to work with animals but had not planned to work at a zoo until I started volunteering,” explained Celyn. “My ambition is to be a vet or specialist veterinary nurse working with animals needing prosthetic limbs and would like to do a Degree Apprenticeship.

“I decided to do an apprenticeship to gain practical skills and knowledge because, in this industry, experience is everything.”

Because Celyn is so passionate about apprenticeships and the Welsh language, she has been appointed an Apprenticeship Ambassador by Coleg Cymraeg Cenedlaethol and the National Training Federation of Wales (NTfW).

Coleg Cymraeg Cenedlaethol leads the development of Welsh medium and bilingual education and training in the post-compulsory sector in Wales while the NTfW represents work-based learning providers across Wales.

“I tried to incorporate as much Welsh as I can in the weekly apprenticeship updates with my tutor,” she explained. “Due to the Covid-19 lockdown, I have been unable to do much in my role as an Apprenticeship Ambassador yet, apart from social media updates, but I am looking forward to promoting bilingual apprenticeships when I am able to do so.

“I think it’s very important to promote the Welsh language here in Mid Wales and to get more young people speaking it.”

Celyn is keen to gain more experience of working with animals and birds of prey as she develops her career and qualifications.

Rowan Flindall-Shayle, who nominated Celyn as an Apprenticeship Ambassador, said: “Celyn was a delightful young learner to work with, as she was so committed and dedicated to her job and animals and learnt at a fantastic rate,” she said.

“It is so nice to find a young person who really knows what she wants to do, and I saw a massive improvement in her confidence during her apprenticeship.”

« William named Wales’ Apprentice of the Year after saving employer £20,000   —   Students and lecturers awarded as part of the Coleg Cymraeg’s tenth anniversary »