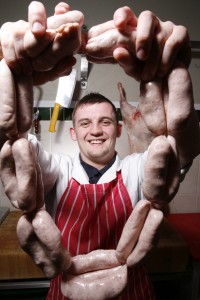 One of Wales’ best known butchers is appealing to learners and employers to enter this year Vocational Qualification (VQ) Awards, which are being launched today (Wednesday, February 5).

Tomi Jones, 24, owner of Jones’s Butchers, Llangollen, received a major boost to his career and business after winning the VQ Learner of the Year award for Wales in 2013 and is in no doubt about the value of vocational training.

The VQ Learner the Year Award recognises learners who clearly demonstrate progression and excellence in vocational studies and have made considerable achievements in their field. The VQ Employer of the Year Award recognises employers who promote the value of vocational qualifications in the workplace and make a real contribution to improving the skills and national competitiveness.

“Winning the VQ Award last year was a massive achievement for me as a butcher and the publicity surrounding it generated a lot of extra orders for the shop and my online business,” said Tomi, former Welsh Young Butcher champion. “It just proves that hard work and dedication gets you to where you want to be.

“I would definitely encourage learners and employers across Wales to enter the award this year. It’s like the National Lottery, you have to be in it to win it. If you win, it will develop you as a person and also get you noticed if you’re in business.”

Since winning the VQ Award, Tomi has been appointed an ambassador for the ‘Future Skills…food for thought’ campaign and competed at The National Federation of Meat and Food Traders’ Premier Young Butcher competition at the NEC, Birmingham.

This year, he aims to focus on expanding his business in Llangollen and has exciting plans in the pipeline. A third generation butcher, he has run the business for four years and employs two apprentices.

Having completed an Apprenticeship in Butchery Skills, he is planning to progress to a National Vocational Qualification Level Four in Food Manufacturing Excellence with award-winning training provider Cambrian Training Company this year.

Learners and businesses across Wales are being encouraged to follow in Tomi’s footsteps by entering this year’s EU-backed VQ Awards. The winners will be announced at an awards ceremony on June 4, VQ Day, a national celebration of people who have achieved success in vocational education in Wales.

Award nomination forms can be found at: www.vqday.org.uk/vq-awards and they must be completed by May 2.

An initiative established by independent education charity Edge Foundation, VQ Day aims to raise awareness about the role that technical, practical and vocational learning plays in society and in the UK economy. VQ Day supports the aspiration that vocational qualifications, which are not just for young people, should achieve parity of esteem alongside other educational routes.

Wales’ Deputy Minister for Skills and Technology, Ken Skates said: “It’s time that Vocational Qualifications are given the recognition they truly deserve. They are the gold standard in professional excellence and we must ensure they are recognised alongside academic qualifications for their value to learners and the Welsh economy.

“Wales has a real wealth of talented and committed people who have excelled in their vocational studies and VQ Day is a chance for us to celebrate their achievements. As Tomi’s story shows us, a VQ award is more than just an award; it’s a symbol of dedication towards your chosen profession.

“It’s also equally important that we recognise the role of employers in promoting vocational qualifications in the workplace. Their support and commitment will be vital if we’re to achieve our ambition of creating a more highly-skilled Wales.”

Vocational qualifications have never been more important to the economy and the individual, as they deliver the trained, talented employees that businesses are crying out for and ensure young people have the skills needed to succeed in education and work.