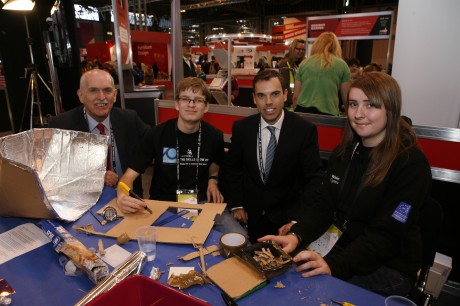 Wales’ most skilled young people have been honoured at a glittering awards ceremony at The Skills Show, which took place from 14 – 16 November at the NEC Birmingham.

There were 15 medallists from across Wales in the WorldSkills UK Competition Finals, claiming eight Gold, three Silver and four Bronze awards as they competed against the best in their respective fields from all over the UK.

There were also Welsh winners in Reflexology, Automotive Painting and Automotive Body Repair, Microsoft IT Technician and Electrical Installation claiming a mixture of Silver and Bronze awards.

WorldSkills UK Competitions inspire young people and adults to be ambitious in their pursuit of skills to the highest level and are the highlight of The Skills Show. During The Skills Show, over 700 of the UK’s most talented apprentices, employees and learners – including 60 from Wales – battled it out in 70 competitions ranging from Forensic Science to Floristry to be named the ‘best in the UK’ in their chosen skill.

Architectural Glass Gold Award Winner Christopher Woodley said: “To win Gold and be presented with my medal in front of everyone at the LG Arena at the NEC has been amazing. Taking part in the WorldSkills UK Competitions has allowed me to build on my knowledge and practical skills and this has helped me progress in my field.”

There were 15 medal winners from across Wales, all of whom earned their place after battling it out against peers in their field and 6 individuals were recognised as Highly Commended . Initially, they were required to compete against colleagues within their college and then, if successful, were invited to compete at a national level, as part of heats organised within colleges across Wales by Skills Competition Wales (SCW.)

Ken Skates, Deputy Minister for Skills and Technology, said: “Congratulations to all of this year’s winners. Skills are vital to the future of our country and it’s great to see so many talented young people taking part and demonstrating their expertise. I hope today’s winners will inspire others to begin learning a new skill which could lead to a new career and then to become the stars of tomorrow.”

Competitors from this year’s cycle of WorldSkills UK Competitions may be eligible to compete for a place in the team that will represent the UK at WorldSkills Sao Paulo 2015. The WorldSkills Competition takes place every two years in cities around the globe and is the largest international skills competition.

Keith Smith, Director, The Skills Funding Agency and UK Official Delegate to WorldSkills International added: “I offer my congratulations to the winners of WorldSkills UK. It takes hard work, determination and a high level of skill to compete against the UK’s most talented apprentices and learners.

“By holding the WorldSkills UK National Competition Finals at The Skills Show we can showcase and celebrate the high levels of talent entering the UK’s workforce.”
To register your interest for the next cycle of WorldSkills UK Competitions please visit www.worldskillsuk.org