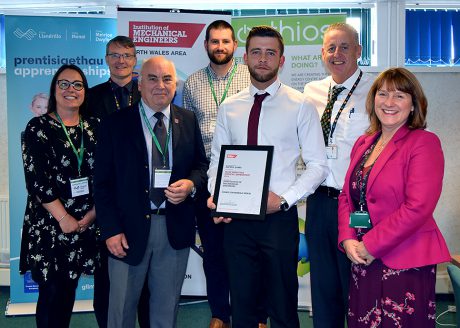 Engineering apprentice Dafydd Morris Jones from Anglesey recently received an award for the “Most Improved Apprentice 2018” from the Institution of Mechanical Engineers at a ceremony at Coleg Menai.

Dafydd who is an apprentice with Orthios Eco Parks (Anglesey) Limited, impressed his bosses, co-workers, tutors and the ImechE with his self-motivation, commitment to his work and to promoting Science Technology Engineering and Maths (STEM) subjects to younger students at local STEM school events.

For Dafydd this is the second award of recognition he has received in less than 12 months, he was awarded ‘Engineering Apprentice of the Year’ at Grŵp LLandrillo Menai’s annual Apprenticeship Awards earlier this year.

Speaking at the event, Gareth Cemlyn Jones, Chairman of the IMechE Merseyside and North Wales Region commented:
“Dafydd has proved himself to be a committed and motivated young man, and a credit to the profession, not only does he stretch himself to complete additional courses in order to expand his skills and knowledge, he is an excellent ambassador for his employers Orthios and for the Engineering profession.
“At IMechE we truly believe that we can improve the world through engineering. We find and nurture new talent, helping engineers build their careers and take on the challenges that, when solved, will make a difference to us all.
“Through his work promoting STEM subjects at local schools and his apprenticeship with Orthios Dafydd demonstrates his commitment to the Engineering profession. He has a promising career ahead of him.”

A Mechanical Engineering Apprentice, he has already completed his level 2 Apprenticeship and is well on the way to achieving his level 3.

Wendy Williams from Orthios commented:
“Dafydd joined Orthios as a Mechanical Engineering Apprentice back in February 2016 since joining Dafydd has been involved in various tasks as well as mechanical maintenance work and is currently undertaking the EAL NVQ3 Extended Diploma in Engineering Maintenance with a focus on Total Productive Maintenance Techniques.”
“We are extremely proud of Dafydd’s accomplishments and wish him continued success.”

Dafydd says “Since starting my apprenticeship, I have developed a better understanding of maintenance procedures and various pieces of mechanical equipment; how they work and the different symptoms that occur when parts fail.
Being part of the Orthios team has made me more confident and the support offered by my Orthios mentor and peers has been excellent”.

Orthios is a regenerative development specialist whose ethos embraces sustainability and the circular economy.

Orthios intends to develop its Polymer Process Centre at its Holyhead site converting waste plastic into oil, tackling the problem of high volumes of UK and EU plastic waste and pollution.

During the last 2 years Orthios has undertaken a detailed assessment of a number of polymer processing technologies and have partnered with a proven technology provider, in addition to engaging with leading engineering and environmental consultants.

Orthios remains firmly committed to these plans and will update our stakeholders at a time most appropriate.