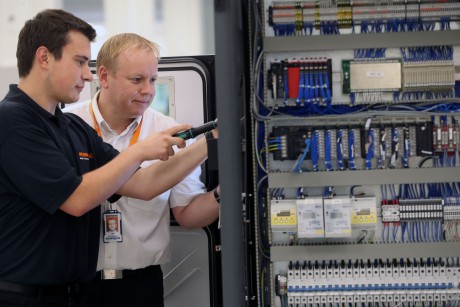 Stephen Pickles was a hands-on learner in school and always enjoyed working on projects at home. He knew he didn’t want to stay in full time classroom education and set his sights on an engineering career.

At 16 he was offered an apprenticeship with global engineering company, Renishaw which is involved in measurement, motion control, healthcare, spectroscopy and manufacturing. The company employs more than 2,800 people in the UK.

Stephen, 19, has achieved a HNC in Mechanical Manufacturing Engineering with grade distinction, an NVQ level 3 commissioning qualification through the University of South Wales, which was achieved in half of the allocated time. He plans to progress to full HND and Diploma in Manufacturing and Mechanical Engineering.

Now he has been recognised as one of Wales’ star learners by being shortlisted for this year’s Apprenticeship Awards Cymru. He will be competing to become Apprentice of the Year at the prestigious awards ceremony at the Celtic Manor Resort, Newport on October 20.

Jointly organised by the Welsh Government and the National Training Federation for Wales (NTfW), the coveted awards are sponsored by Pearson PLC and supported by media partner, Media Wales.

Thirty star learners, employers and learning providers involved in the delivery of successful skills programmes across Wales have been shortlisted for the Apprenticeship Awards Cymru.

The awards are designed to showcase and celebrate the outstanding achievements of learners, employers, tutors and assessors who have excelled in contributing to the development of the Welsh Government’s Traineeships and Apprenticeship programmes.

Stephen, who lives in Llanrumney, is now in his final ‘Improver’ year at Renishaw. He has completed nine projects all with technical folders and successful results – the first time an apprentice has achieved this on the Miskin site.

He exceeded everyone’s expectations when, at the age of 16, he completed his first project, one that university graduates had failed to complete in the timeframe.

He is currently working in the Assembly Development Group where he helps to apply engineering changes to Renishaw’s advanced metal additive manufacturing machines.

Lee Hodgson, Stephen’s mentor, said: “I think the best compliment I can give Steve is that several Renishaw personnel have commented that they thought he was an engineer and were taken aback when I told them he’s still an apprentice.”

Praising the standard of applicants this year and congratulating Stephen on being shortlisted for an award, Skills and Science Minister, Julie James said: “This year’s shortlisted entrants include exceptional individuals who have excelled in their workplace and learning providers and employers that have gone the extra mile to support the apprentices they are working with. Their stories never cease to amaze and inspire.

“Apprenticeships and vocational skills training are essential ingredients of economic success and vital tools in building a stronger, fairer and more equal Wales.

“These awards provide a perfect platform to celebrate success and reward the hard work and dedication of learners, employers and training providers across Wales. I wish everyone the very best of luck for the night.”