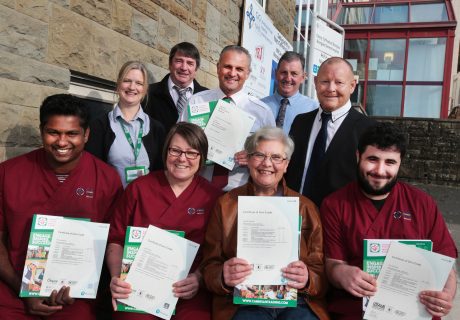 The learning partnership between the hospital and Cambrian Training began 15 years ago and 101 staff, aged between 17 and their 60s, have since completed apprenticeship frameworks.

The apprenticeships have been so successful at lowering staff sickness levels and improving performance that Hywel Dda University Health Board is considering using Bronglais as a model to introduce them in other hospitals in the new year.

The frameworks completed at Bronglais, ranging from foundation to higher apprenticeships, include hospitality management, hospitality supervision, housekeeping, food and drink services, cleaning and support services skills and hospitality services. The Apprenticeship Programme is funded by the Welsh Government with support from the European Social Fund.

“Achieving the 100th apprenticeship through Cambrian Training shows the consistent period of investment in staff at the hospital,” said Mr John. “The training has resulted in a significantly lower level of staff sickness at Bronglais which consistently has the highest standards of cleanliness.

“The training stimulates the workforce to be hungry for learning and development and they are more motivated which is borne out by the levels sickness and performance.”

Bronglais General Hospital’s hotel services co-ordinator Steve James said he was delighted that 101 kitchen and domestic staff, porters and drivers had achieved apprenticeships over the past 15 years.

“In my opinion, this has been a wonderful and worthwhile venture that has proved very beneficial to the staff and brilliant for the hospital,” he said. “All training is work-based and the trainers are excellent, undertaking an assessment of the education level of each staff member at the start.

“In my experience, well trained staff are much happier and competent.”

Training officer Joanna Davies, from Cambrian Training, has the distinction of having delivered qualifications to the company’s first and 100th apprentices at the hospital. After eight years working with her team delivering qualifications at the hospital, she left to run a business with her husband, Nick, for six years before returning last November.

“I was one of the first training officers at Bronglais Hospital 15 years ago with my hospitality team which delivered various qualifications,” said Joanna. “It’s a privilege to come back to Cambrian Training and be able to continue to deliver qualifications at Bronglais.

“I am delighted that the hospital has now achieved more than 100 apprenticeship frameworks by continuing to work closely with Cambrian Training.”

« “My digital Apprenticeship has had a positive impact on my learners, myself and my colleagues.”   —   #WelshAtWork – Exciting New Campaign launched to promote using Welsh at work »