Ambassador keen to promote apprenticeships through medium of Welsh 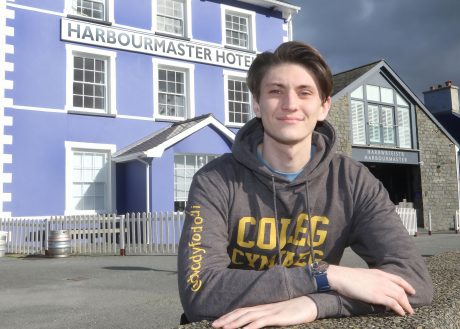 Being able to do his apprenticeship through the medium of Welsh was very important to who has completed his entire education and training to date in his first language.

Iestyn, 25, bar manager at the award-winning Harbourmaster hotel in Aberaeron, has completed his Apprenticeship in Hospitality Supervision and Leadership with learning provider Cambrian Training and is now considering progressing to a Higher Apprenticeship.

Because of his passion for the Welsh language and apprenticeships, he has been appointed an Apprenticeship Ambassador by Coleg Cymraeg Cenedlaethol (CCC) and the National Training Federation of Wales (NTfW).

“Welsh is my first language and it’s what I enjoy speaking at home, at work and to friends,” said Iestyn. “I think it’s very important that there are opportunities to learn through the medium of Welsh and, being an Apprenticeship Ambassador, allows me to demonstrate to other apprentices that it’s possible.

“My apprenticeship has improved my skills in every aspect of the way I work both within and outside of the Harbourmaster. It has built my confidence and given me a better understanding of my job and how to lead a team.”

His love for Ceredigion then brought him back to Aberaeron where he secured his current full-time job. In addition to his work, he performs acoustic Welsh pop music with his sister, Gwenno and plays in a band with friends he met whilst at university.

Before the Covid-19 lockdown, Iestyn managed to combine both passions when he and Gwenno supported Welsh singer-songwriter Bryn Fôn in a performance at the Harbourmaster.

Iestyn says he’s happy to progress his hospitality career at the Harbourmaster but always has one eye on recording, production and theatre opportunities to use his music technology skills.

He praised the support he had received from Cambrian Training’s Welsh speaking training officer Hazel Thomas who nominated him as an Apprenticeship Ambassador.

“Iestyn is an excellent Welsh language ambassador who can encourage other learners who want to do an apprenticeship in their mother tongue,” she said. “The learning platform that we use at Cambrian Training allows learners to translate their work into the language of their choice, at the touch of a button, thanks to the new translation feature added to the Learning Assistant.

“To achieve the Welsh Government’s target of one million Welsh speakers by 2050, we must give apprentices the chance to learn through the medium of Welsh, which is a skill that provides job opportunities.”