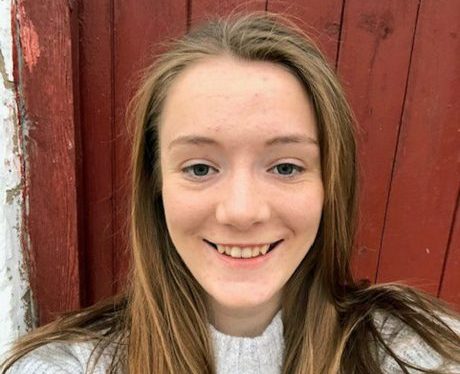 An ambassadorial role is nothing new to Urdd Gobaith Cymru apprentice Llio Bryn Jones who loves coaching sports and is proud of her Welsh language and farming background.

Llio, 18, from Henllan, near Denbigh, has been appointed an Apprenticeship Ambassador by Coleg Cymraeg Cenedlaethol (CCC) and the National Training Federation of Wales (NTfW).

Her role involves promoting bilingual apprenticeships and encouraging more people to speak the Welsh language, especially in the workplace.

She completed her education through the medium of Welsh at Ysgol Llannefydd School and Ysgol Glan Clwyd and is now working towards a Foundation Apprenticeship in Activity Leadership with The Urdd.

“Having never wanted to go to university, The Urdd has given me a great opportunity to carry on my passion for sport coaching,” said Llio, whose family owns a sheep and beef farm.

“I much prefer an apprenticeship, as I am not comfortable in a classroom setting. You get so much hands-on experience and meet some extraordinary people whilst working and achieving qualifications that will help you in the future.”

Llio, whose ambition is to become a sports development officer, has collected health and safety, first aid and various sports coaching qualifications so far to assist her development.

Instead of providing sports activities for children in schools and in the community during the Covid-19 lockdown, she has adapted to deliver them online. “The children enjoy the virtual activity sessions, such as gymnastics and netball, so much,” she said.

Speaking about her passion for the Welsh language and her Apprenticeship Ambassador role, Llio said she is keen to promote opportunities to learn bilingually or through the medium of Welsh to other young people.

“It’s important to me that I am able to do what I love doing in Welsh,” she explained. “The Welsh language is part of me. I think it helps an individual so much to be able to speak two languages because some companies are now looking for this ability.”

“Llio is a brilliant ambassador and is a member of our Apprenticeship Forum Steering Group,” she added. “Everything we do at The Urdd is working towards the Welsh Government’s target of achieving one million Welsh speakers by 2050.

“An important part of our work is enabling young people to learn how to adapt their Welsh language skills to a work-based setting.”