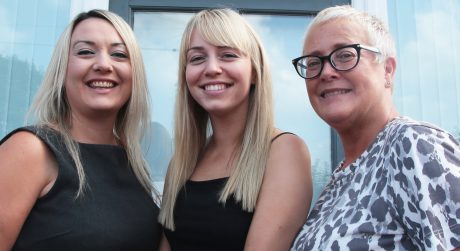 Mencap is focused on ensuring that Welsh speakers accessing the charity’s services in Cardigan can use their first language when engaging with staff.

Manager Charlotte Morgan has arranged for one of the service users to lead Welsh language workshops for Mencap staff in the Mid Wales coastal town. English speaking staff are being taught a set of basic words and phrases that they can use when talking to service users who prefer to speak Welsh.

The lessons are part of the charity’s response to the ‘Active Offer’, the Welsh Government’s drive to ensure care providers actively offer and deliver Welsh and English language care services to the same standard.

As part of her role as a Mencap manager, Charlotte compiled an information pack to help support workers engage with Welsh speaking service users.

“There is a number of staff that don’t speak any Welsh so, with the Active Offer in mind, we thought it would be a good idea to give them a language lesson,” she explained.

“The Active Offer says that all social care staff should be able to communicate with people who wish to speak in Welsh. For some of our service users, like Carwyn, Welsh is their first language and it’s their preferred way to communicate.

“Carwyn agreed to teach the staff some basic Welsh – things that the people we support tend to ask and the responses that staff can give. It went down really well and the staff enjoyed it. More lessons are planned.”

Welsh speaker Charlotte, 24, who lives in Penparcau, Aberystwyth, manages four services in Cardigan for Mencap, which supports people with a learning disability, together with their families and carers.

She leads a team of 20 staff, some of whom are doing a Level 2 Foundation Apprenticeship and a Level 3 Apprenticeship. She has herself completed a Higher Apprenticeship Qualifications and Credit Framework (QCF) Level 5 in Health and Social Care Adult Management, delivered by Progression Training in Newtown.

Charlotte recommended apprenticeships as a great way to learn new skills in the workplace and explained that the QCF Level 5 was mandatory for Mencap’s care service managers.

She said she would encourage and support staff members who wished to do their apprenticeship through the medium of Welsh.

“I think it’s important that people are given the opportunity to do their qualifications through the medium of Welsh because it’s our national language,” she added. “As you get older, you realise that being able to speak Welsh is an asset when you are looking for jobs.”

Jaine Evans, Mencap’s area operations manager, said: “I think Charlotte was very proactive in thinking up the idea of Welsh lessons for staff and putting it in place. Giving Welsh speaking service users the opportunity to communicate in their first language is paramount.”

Sara Davies, senior training advisor at Progression Training, said: “It has been my pleasure to work with Charlotte and to watch her growth into the amazing manager that she is today. She is only 24 and has an exciting career ahead of her.”