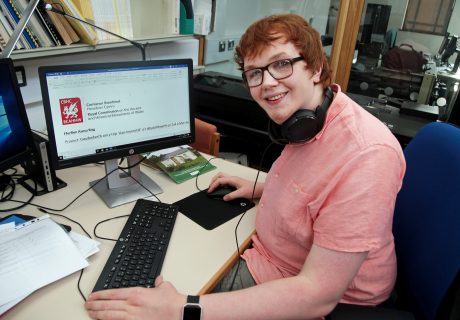 Tomos James is coming to the end of a pioneering Cultural Heritage Traineeship which he is undertaking mostly in the Welsh language.

The 22-year-old Aberystwyth learner is one of the first cohort of Cultural Ambition trainees to work towards the new qualification which is being delivered by Cardiff and Vale College (CAVC). The Apprenticeship Programme is funded by the Welsh Government with support from the European Social Fund.

The Cultural Ambition programme has been developed by Creative & Cultural Skills jointly with CAVC and is funded by the National Lottery Heritage Fund’s Skills for the Future programme and the Welsh Government.

The programme aims to provide 33 young people, who are not in education, employment and training, with 12-month training placements based in heritage sites across Wales.

The trainees, who come from diverse backgrounds, work towards an NVQ Level 2 in Cultural Heritage as part of this traineeship and are given an e-portfolio of their work to show potential employers. The programme covers a variety of skills which lead to a qualification and increased employability prospects.

Tomos has spent his year working at Ceredigion Museum, The National Library of Wales and the Royal Commission on the Ancient and Historical Monuments of Wales, all based in Aberystwyth. Because his first language is Welsh, CAVC has delivered as much of the qualification as possible in Welsh.

Assessments have been carried out in English and written work in Welsh, which has suited Tomos, who previously studied IT at Coleg Ceredigion. “I feel more comfortable using my first language and I think it’s good that I have been able to do most of the qualification in Welsh,” he said.

He is due to complete the qualification on September 8 and has enjoyed his three placements which have introduced him to new and diverse experiences.

A customer facing role at Ceredigion Museum was followed by time working in conservation, marketing, human resources, estates and customer services at the National Library of Wales and on the Unloved Heritage Project at the Royal Commission on the Ancient and Historical Monuments of Wales.

The Unloved Heritage Project is a Wales-wide youth programme led by CADW that uses archaeology and creative activities to empower young people to protect their local heritage.

“It has been interesting getting new experiences and I have enjoyed working in the different places,” added Tomos, who revealed that his ideal job would be in the marketing team at the National Library of Wales.

Helen Kingman, a CAVC lecturer and assessor, explained: “We have a policy at CAVC which seeks to ensure that if a learner wants to work through the medium of Welsh, we will do everything we can to make that possible.

“I think it’s important to recognise and celebrate that learners have the extra skill of being bilingual. The mentors who have been working with Tomos are Welsh speaking and he has done very well. He’s very interested, motivated, enthusiastic and a joy to work with.”

Anna Evans, Unloved Heritage Project co-ordinator at the Royal Commission for Ancient Monuments Wales, has been mentoring Tomos on his final placement which has seen him help to put on an exhibition in the Senedd in Cardiff as well as carrying out risk assessments in Welsh.

“Tomos writes really well in Welsh,” she said. “I think it’s crucial that learners have the opportunity to do qualifications bilingually, even multi-lingually, so that when they go abroad, they have the skills to function in all languages.”