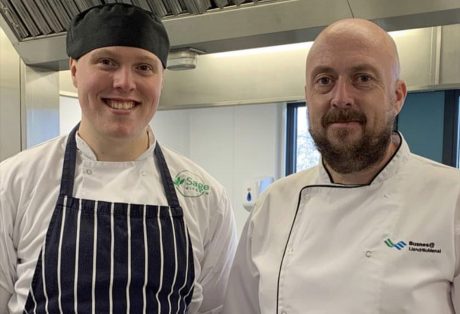 Jack, 22, who works as a commis chef for Sheeps and Leeks restaurant in Caernarfon, believes he has found his true vocation in work-based learning.

He has completed a Level 2 Foundation Apprenticeship in Professional Cookery through City & Guilds, delivered bilingually by Grŵp Llandrillo Menai in Llangefni and has now started a Level 3 Apprenticeship. He began his apprenticeship whilst working for Menai Bridge restaurant Sage Kitchen

“Had I known what I do now, I would never have done A levels,” said Jack. “I would have chosen an apprenticeship because you get so much experience in your field of work which is what employers are now looking for.

“You also earn while you learn rather than building up a debt every year while you are at university.”

An advocate of Welsh medium and bilingual apprenticeships, Welsh speaking Jack has been appointed an Apprenticeship Ambassador by Coleg Cymraeg Cenedlaethol and the National Training Federation of Wales (NTfW).

“Being appointed an ambassador is an opportunity to promote Welsh medium and bilingual apprenticeships, myself and the business I work for,” said Jack. “I have spoken Welsh since I was four and I think it’s important to promote the language and keep the culture alive.

“Being able to speak both Welsh and English is an advantage when it comes to employment in Wales because you have an extra skill.

“As an ambassador, I want to promote apprenticeships to people who might not have considered them as an option. I have experience of going down the academic route and discovering that university and that level of academia were not for me.”

Jack took part in an Instagram takeover organised by Coleg Cymraeg Cenedlaethol and the NTfW during the annual Apprenticeship Week in Wales. He talked about his job and included a video showing him making a mushroom and leek risotto.

“I have been cooking at home since the age of 11 but joining a restaurant was a huge step up,” he said. “I enjoy cooking so much that it doesn’t really feel like work. It’s definitely the best the career move I could have made.

“In the future, my ambition is to travel because chefs are in demand around the world.”

“Welsh for both Jack and I is our second language,” he said. “By working together, we have improved each other’s Welsh which is really good. It’s a mutual learning journey and most of the time we converse in Welsh during assessments.

“All our learners get an opportunity to learn in Welsh, English or bilingually. Jack is a brilliant learner with a passion for cooking and a thirst for information and knowledge.”

Lisa Mytton, the NTfW’s strategic director, said: “Many workplaces are becoming more bilingual, so completing an apprenticeship bilingually or in Welsh can increase an individual’s confidence to work in both languages and their employability,

“With the Welsh Government’s target to reach one million Welsh speakers by 2050, it has never been more important to develop your bilingual skills and increase your employability prospects.”