Welsh speaking Ben Pittaway is crafting a promising career for himself in the construction industry with an Apprenticeship in Carpentry. 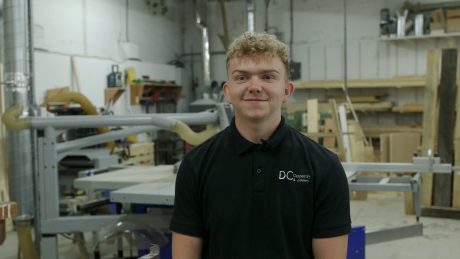 Ben, 21, from Port Talbot, gained experience as a plasterer after leaving school but soon decided he was better suited to carpentry and was taken on by D. C. Carpentry and Joinery in the town more than two years ago.

He is now working towards a bilingual Level 3 Apprenticeship in Site Carpentry through City & Guilds, delivered by Pathways Training at NPTC Group of Colleges in Swansea.

Due to his passion for apprenticeships and the Welsh language, he has been appointed an Apprenticeship Ambassador by Coleg Cymraeg Cenedlaethol and the National Training Federation of Wales (NTfW).

“I love every minute of being an apprentice carpenter,” said Ben. “I like the freedom of working somewhere different every day, meeting different people and being able to put passion into my work.

“I previously worked as a plasterer for 18 months and realised it wasn’t for me. I still have a lot to learn but I’m looking forward to a good career.”

Ben has passed a course to qualify to install fire doors under supervision and hopes to continue adding new skills.

Speaking about his pride in becoming an Apprenticeship Ambassador, he said: “Speaking Welsh is important to me because it’s our national language. I support learners having the opportunity to do bilingual and Welsh medium apprenticeships. Assessments with my assessor Wyn Williams are bilingual.

“My advice to anyone who is considering a bilingual apprenticeship is to go for it because it’s the best way to learn everything about the job that you will be doing and earning at the same time.”

Mr Williams, a carpentry lecturer at NPTC Group of Colleges in Swansea, said Ben had begun learning on a multi-trades course before opting for carpentry as a career.
“Ben is a hard worker, picks up skills quickly and is coming on leaps and bounds,” he added.

Darren Cockings, managing director of D. C. Carpentry and Joinery, said: “Ben is young, enthusiastic and progressing well in his trade. He does a variety of work ranging including installing fire doors, bathrooms and kitchens.

“He is one of the few Welsh speakers that we employ but we would welcome more as it is advantageous to the business, with many of our clients encouraging bilingualism in the workplace.”