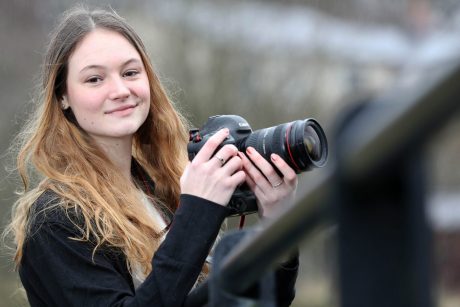 A teenager who has her sights on a teaching career after moving half way around the world to begin a new life in South Wales has won a prestigious national award.

Jessica Apps, 19, from Forge Side, Blaenavon, was named Traineeship Learner of the Year (Engagement) at the Apprenticeship Awards Cymru 2021 virtual ceremony on June 17.

Despite arriving in Wales from Botswana with GCSE grade equivalents, Jessica was unable to join a college which led to her losing confidence and feeling lonely until she joined Sgiliau Cyf who described her as a “superb role model”.

A Traineeship Creative Engagement Programme, which allowed Jessica to develop her passion for photography and creative writing, restored her confidence. She also achieved a Duke of Edinburgh Bronze Award and made a lot of new friends.

She is now studying ‘A’ levels in Sociology, Photography and Literature at Coleg Gwent and hopes to go to university to study sociology and become a teacher.

Responding to her award, Jessica said: “This award means so much to me. I was so nervous before moving to Wales and wondered if I was doing the right thing. The award shows me that I am doing something right.

“Sgiliau Cyf and my family have provided me with the support and motivation to be the best that I can be. Doing a Traineeship was definitely worthwhile as it changed my whole life here in Wales and I am now looking forward to starting university in September.”

Jessica, who moved to Wales with her mum and younger sister, wants to continue volunteering with Sgiliau Cyf to help other young people who feel disengaged from employment and learning as she once did.

“I can’t thank Sgiliau enough for helping me grow into who I am today,” she said. “I have always wanted to help people and I really enjoy volunteering with the company, which has encouraged me to want to be a teacher.”

Congratulating Jessica, Minister for the Economy, Vaughan Gething, said: “Our award winners have excelled via the Welsh Government’s Apprenticeship and Traineeship programmes and gone the extra mile to achieve success during unprecedented and extremely challenging times.