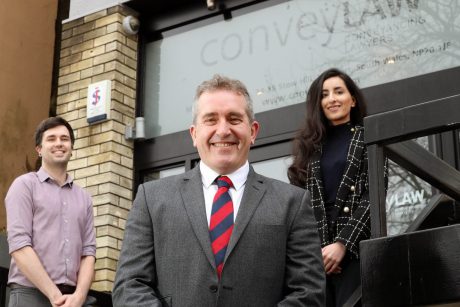 Newport-based law firm Convey Law is an Apprenticeship Awards Cymru 2021 winner after impressing judges with its ambitious plans to grow by 50% this year, fuelled by an innovative Apprenticeship Programme.

The company, which will train more than 50 new trainee conveyancers with its in-house Apprenticeship Programme in the next year, was named Medium Employer of the Year at the virtual awards ceremony on June 17.

Convey Law has developed a “life-changing” apprenticeship pathway after struggling to recruit enough conveyancers to fuel their business growth.

Responding to the award, Convey Law’s managing director, Lloyd Davies said: “We are all tremendously humbled to be recognised for the fantastic work our team have done in developing our apprenticeship programme and training courses.
“When we made the decision to do something proactive about not being able to recruit as many experienced staff as we needed to expand, we never dreamt our training academy and training courses would lead us down such an incredible and rewarding path, where we are making a genuine difference to many people’s lives here in Wales.”

Convey Law has found it more beneficial to train up its own recruits in the latest client service protocols whilst supporting them with their learning in a way that reflects the company’s values and work ethic.

The company created The Conveyancing Academy, which has a funding partnership with Cardiff and Vale College, in 2014 to provide courses to the wider conveyancing industry in Wales and England.

“We anticipate that our Conveyancing Pathway will be adopted by most legal practices in Wales and England over the coming years, facilitating the professional qualification of thousands of young Licensed Conveyancers,” said James Smith, business development manager at The Conveyancing Academy

Convey Law’s results from investing in its own Apprenticeship Programme are admirable, with Trustpilot and client service ratings rising from 78% to 90%.

The programme has helped the company to meet its recruitment targets with the number of conveyancers increasing from 25 in 2019 to 55 in 2020. Apprentices have doubled from 15 to 30 in a year.

Congratulating Convey Law, Minister for the Economy, Vaughan Gething, said: “Our award winners have excelled via the Welsh Government’s Apprenticeship and Traineeship programmes and gone the extra mile to achieve success during unprecedented and extremely challenging times.