Bilingual apprenticeships play a key role in the success of a leading North Wales based business which is one of the UK’s largest civil engineering firms. 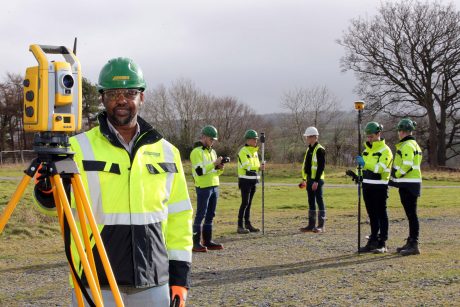 Jones Bros’ training manager Garmon Hafal with some of the company’s apprentices.

Jones Bros Civil Engineering UK, which is headquartered in Ruthin, has workforce of more than 500 and has recruited more than 100 apprentices in the past four years.

The company, which has a purpose-built training centre in Denbigh, hopes to have 30 new apprentices onboard by September. Welsh speaking apprentices are able to complete their apprenticeships bilingually, with practical work in Welsh and written work in English, mainly because the awarding bodies are based in England.

Higher Apprenticeships at Levels 4 and 5 in Civil Engineering and Construction Management are delivered by Coleg Cambria. The awarding bodies for the range of apprenticeships are City & Guilds and Pearson.

Jones Bros is being highlighted by Coleg Cymraeg Cenedlaethol and the National Training Federation of Wales (NTfW) as a champion of bilingualism in the workplace.

Coleg Cymraeg Cenedlaethol leads the development of Welsh medium and bilingual education and training in the post-compulsory sector in Wales whilst the NTfW represents work-based learning providers across Wales.

“As more than half of our apprentices come from North West Wales, they prefer to be taught through the medium of Welsh, which is their first language,” he added. “Most of the verbal training is in Welsh and the paperwork is in English.

“We are lucky that five of our seven trainers and assessors are Welsh speakers and most of the company’s employees, from director level down, speak Welsh. It’s important to the company that we offer as much training as we can in Welsh and in a way that’s most comfortable for our learners.

“We invest heavily in our Apprenticeship Programme which is massively important because it provides opportunities for young people from across the UK to develop careers in the construction industry.

“We have provided an average of 30 apprenticeship opportunities every year for the past six years. We go above and beyond what we need to deliver so that we build skilled allrounders over the course of the apprenticeships.

“Out of the 400 employees that work on site, more than 100 will have come through our Apprenticeship Programme.”

Established in the 1950s, Jones Bros’ leadership team consists of members of the second and third generations of the founding family. The company has won contracts in sectors including highways, flood and marine defence, waste management and renewable energy around the UK.

“We are keen to develop our partnership with Jones Bros by working closely together and sharing their good practice,” he added. “Construction qualifications are changing and we want our partnership to be even more productive.

“It’s very evident that the company supports and invests in their apprentices to develop their skills and competence which is contributing to the success of the business.”

Emrys Roberts, customer engagement adviser for the CITB, which provides grants for construction companies to train their staff, said bilingual apprenticeships are at the heart of the sustainable workforce model at Jones Bros.

“I think it’s very important that apprentices of all ages, who have been educated in Welsh, are able to continue their learning in the language of their choice,” he added.

Attendance and achievement grants are available from the CITB for Construction Apprenticeships.

Ryan Evans, the NTfW’s bilingual champion, said: “Many workplaces are becoming more bilingual, which can be very beneficial to employers, especially when providing services to Welsh speaking customers.

“Completing an apprenticeship bilingually or in Welsh can increase an individual’s confidence to work in both languages and their employability, whilst also being a great asset to their employer.

“Jones Bros is an excellent role model for apprenticeships, highlighting the benefits of learning and working bilingually in the workplace.”

Dr Dafydd Trystan, from the Coleg Cymraeg Cenedlaethol, said: “Highlighting successful employers who are active in the apprenticeship sector is a vital tool in showing businesses and individuals that it is both possible and advantageous to support bilingual apprentices.

“With the Welsh Government’s target to reach one million Welsh speakers by 2050, it has never been more important for employers and their employees to develop their bilingual skills to increase their business and employability prospects respectively.”

To find out more about apprenticeship opportunities go to Careers Wales or telephone 0800 028 4844.