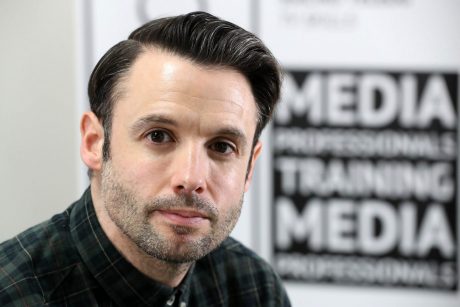 A man who has worked at the cutting edge of the fast-developing world of creative industries for more than 20 years has been named Wales’ Work-based Learning Assessor of the Year.

Matt Redd’s award was announced at the prestigious Apprenticeship Awards Cymru 2021 ceremony which was held virtually for the first time on June 17.

As a writer and producer for both film and television drama, 41-year-old Matt, from Cardiff, has worked for training provider Sgil Cymru for the past five years as a freelance assessor on Creative and Digital Media Apprenticeships.

He ensures that his assessment methods complement the working practice of each production, unobtrusively engaging with learners in their workplace.

Responding to his award, Matt said: “I am very happy, excited and privileged to have won this award in such a competitive field. It’s a ringing endorsement of the work that we are doing at Sgil Cymru to bring apprentices into the media in Wales.

“Everyone working at Sgil Cymru has vast experience and it’s exciting to be part of the team.”

Matt recently worked with British Sign Language interpreters to help a profoundly deaf young man on his apprenticeship to feel safe and comfortable whilst giving him the same freedom his counterparts had in the same role.

Not surprisingly, like many of Matt’s learners, he completed his apprenticeship ahead of schedule.

Matt runs his own production company, Standoff Pictures Ltd, which works closely with Sgil Cymru and Great Point Seren Stiwdios. And it is from there and other working studios that he runs recruitment days where potential apprentices are invited to meet prospective employers.

Lewis Stephens, who successfully gained an apprenticeship with Matt’s support, said: “Matt made it incredibly easy to understand what was needed from each unit. I have gone from someone with no experience to a job with the BBC. Matt made this possible.”

Congratulating Matt, Minister for the Economy, Vaughan Gething, said: “Our award winners have excelled via the Welsh Government’s Apprenticeship and Traineeship programmes and gone the extra mile to achieve success during unprecedented and extremely challenging times.