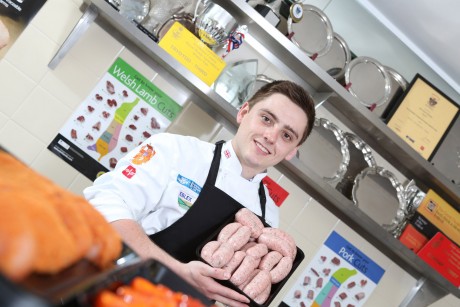 It has been a memorable year for young Welsh butcher Matthew Edwards since reaching the final of the Vocational Qualification (VQ) Awards in Wales in 2014.

Matthew, 23, who works for S. A. Vaughan Family Butchers, Penyffordd, near Chester, has represented Great Britain in a European skills competition in Switzerland and been named Foundation Apprentice of the Year at the Apprenticeship Awards Cymru.

And last weekend, the ambassador for apprenticeships won the Wales heat of the first Butchery WorldSkills UK National Competition. He must now wait until August to discover if he’s one of the six top scoring butchers from the combined heats in Wales, Northern Ireland and England to qualify for the final at The Skills Show, to be held at the NEC Birmingham from November 19 to 21.

Modest Matthew takes it all in his stride. He says at the core of his success are the vocational qualifications he has gained and the training support he has received from his boss, Steve Vaughan and award-winning training provider Cambrian Training Company, based in Welshpool.

Driven by a desire to be the best he can be, he dreams of one day owning the shop where he works. Having achieved a Foundation Apprenticeship, he is working towards an Apprenticeship in Meat and Poultry Industry Skills and plans to progress to a Higher Apprenticeship in in Food Manufacturing Excellence to give him the skills to run a business.

A strong advocate of vocational qualifications and work-based learning, Matthew recently returned to his old school, Castell Alun High School, Hope near Wrexham to speak about apprenticeships in an ambassadorial role.

“I chose an apprenticeship to further my understanding of butchery and to learn everything I can to help me achieve my goal: to own a butcher’s shop and pass on my knowledge to other young, enthusiastic butchers,” he said.

“I have developed my skills by learning on the job and by being given the chance to take part in national and international competitions. I certainly wouldn’t be where I am today without vocational qualifications and the support that I have received Steve and Helen Vaughan.”

He is supporting this year’s VQ Awards in Wales on June 9 and national VQ Day the following day. VQ Day is a national celebration of people who have achieved success in vocational education in Wales.

Vocational qualifications have never been more important to the economy and the individual; they deliver the trained, talented employees businesses are crying out for and ensure young people have the skills needed to succeed in education and work.

Organised by the Welsh Government’s Department for Education and Skills (DfES), the National Training Federation for Wales (NTfW) and CollegesWales, the VQ Awards in Wales help to showcase individuals and organisations that have raised the standard of the services they offer as a result of vocational qualifications. The awards and Matthew’s apprenticeship are part funded by the European Social Fund.