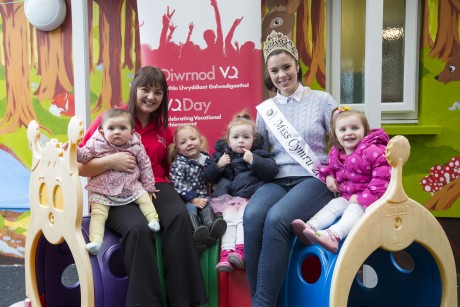 Emma, 22, from Llanelli, who works for the Tinopolis Group in the town, agreed to try a job with Dechrau Disglair (Bright Start) in St Clears to highlight the value of vocational qualifications in the lead up to the VQ Awards in Wales on June 9 and national VQ Day the following day.

Last year, Emma Thomas, 29, who established the bilingual nursery in 2011, won the VQ Learner of the Year Award for inspirational story. She now employs 20 staff caring for 35 children a day under the age of seven.

The VQ Awards are organised by the Welsh Government’s Department for Education and Skills (DfES), the National Training Federation for Wales (NTfW) and CollegesWales. The awards are part funded by the European Social Fund.

VQ Day is a national celebration of people who have achieved success in vocational education in Wales. Vocational qualifications have never been more important to the economy and the individual; they deliver the trained, talented employees businesses are crying out for and ensure young people have the skills needed to succeed in education and work.

“I have friends who have achieved university degrees but they are working in shops because there was no clear pathway for them. I think too many people go to university to do degrees that are not suited to jobs.”

She enjoyed her morning at the nursery and said she was inspired by Emma Thomas’ vocational success story.

Her own road to a television career began at the age of 15 when she secured a work experience placement at Tinopolis and ended up being asked to model for a programme because the regular models were blocked in by snow. She describes it was a case of being in the right place at the right time.

She returned to the company as a part-time model while completing her GCSE and ‘A’ levels and ended up being offered a job as a researcher, with some presenting work. “Presenting is what I always wanted to do and getting a job with a TV company was like a dream come true,” said Emma who is passionate about the Welsh language. “I really love my job.”

She is now the company’s resident beauty expert and regularly presents features on S4C, having developed her skills in the workplace. Her ambition is to one day host ITV’s ‘This Morning’ programme.

In the meantime, she is looking forward to representing Wales in the Miss World beauty contest in October, the venue for which has yet to be announced. Having been modelling since the age of 16, she felt it was a natural progression to enter the Miss Wales contest, which she won in March.

She sees the Miss World contest as helping to empower women and broaden their horizons, whilst at the same time raising lots of money for deserving charities, including Beauty with a Purpose.

Emma Thomas is an example of a young Welsh woman who has harnessed vocational achievement and progression to realise her dream of running her own childcare business. She began working with children with special needs in a holiday club at the age of 15, followed by a classroom assistant’s post in a primary school, where she achieved a Foundation Apprenticeship in Childcare within a year.

She then became after school club leader and progressed to an Apprenticeship in Childcare, which she completed in 2006 whilst working as a deputy manager in a nursery.

Determined to set up her own nursery, she purchased and renovated an old school building in St Clears, working to a tight schedule. Leading her team by example, Emma has completed a Higher Apprenticeship in Childcare Leadership and Development Management and encourages all her staff to develop their skills and achieve vocational qualifications.

The VQ Awards in Wales help to showcase individuals and organisations that have raised the standard of the services they offer as a result of vocational qualifications.

There are two award categories: the VQ Learner of the Year and the VQ Employer of the Year. The winners will be revealed at an awards ceremony to be held at St David’s Hotel, Cardiff on the evening of June 9, the eve of VQ Day.