A young Caerphilly man who has achieved his ambition of working with cars has been shortlisted for a prestigious national award.

Jordan Jackson, 19, is one of 36 finalists in 13 categories of the Apprenticeship Awards Cymru 2013, organised jointly by the Welsh Government and the National Training Federation for Wales (NTfW). He is shortlisted for the Traineeship Learner of the Year Level 1 award. 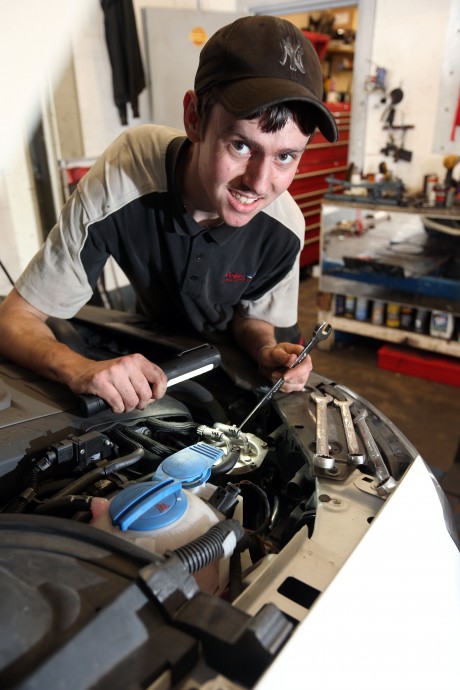 Jordan has achieved his ambition despite a wobbly start to his career. He failed to complete an initial Traineeship programme with ACT Training, which would have secured him a full-time place on the motor vehicle repair and maintenance course. But when later offered another chance by the training provider, he grabbed it with both hands.

Jordan, who settled down and became more responsible and hard-working, said: “I’d grown up a lot in that time and really appreciated being given a second chance.”

He also proved that he was a very good motor vehicle technician, resulting in an apprenticeship with Westyre & Auto Centre in Caerphilly, where his colleagues describe him as professional, polite and courteous to customers.

“I absolutely love my job – I enjoy working with people and I like the hands-on aspect too,” said Jordan. “I’m delighted to have been nominated for this award for all the people who saw what I was and what I could become.”

Matt Harper from ACT Training added: “Many of us make mistakes but rarely learn from them, or worse, use them as an excuse to give up – Jordan didn’t. He recognised that he needed to work hard and took advice and guidance from others. His determination is infectious – people want to work with him and want him to succeed.”