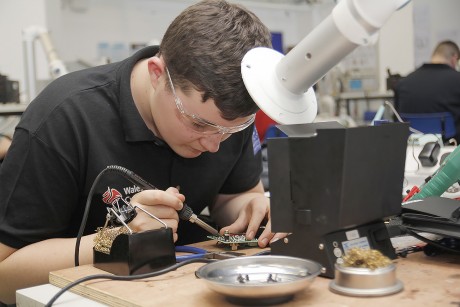 A 17-year-old from Ystradgynlais has won gold in the electronics final of a national skills competition.

Skills Competition Wales is a Welsh Government-backed series of events designed to celebrate vocational skills and create a highly skilled Welsh workforce for the future.

With Olympic athletes training hard for the imminent games in Rio, Ryan Thomas is just one of 78 Welsh youngsters who have been perfecting their skills in a bid to win a medal. Across a range of vocations from graphic design to patisserie, these budding skilled champions, like Olympians, may go on to challenge competitors from other nations.

Ryan, from Gower College Swansea, competed against 15 other students from across Wales. Finalists completed a series of electronics challenges within a five hour time period, including soldering an alarm clock circuit, fixing a faulty circuit board, wiring a prototype circuit as well as a written theory exam. Ryan, who is studying a level 2 digital technology course in electronics, said he is thrilled to have won.

“I’m really surprised to have won, I practiced a lot with my tutors at college. I got quite nervous as soon as lots of other people from different colleges arrived on the day. So I’m really pleased with myself to have been named the best out of all of them.

“I’ve been interested in electronics since I went to Gower College Saturday club a few years ago where I got my first hands on experience of building circuits. I’m currently doing work experience one day a week with Building Services Controls in Swansea which is teaching me a lot. It’s exciting to work on the circuit boards going into big offices and I know that it’s helped me do well in the competition.”

Supported by the European Social Fund and the Welsh Government, and run by a network of colleges and work based learning providers, a total of 33 local Skills Competitions will be taking place between February and April, in a range of sectors from forensic science and car mechanics to web design and nail art.

Ryan may go forward to represent Gower College Swansea in the electronics Worldskills UK heat, with the aim of potentially representing Team Wales at this year’s Skills Show in Birmingham in November. He may then be eligible to compete for a place in the squad which will represent the UK at WorldSkills in Abu Dhabi in 2017.

Deputy Minister for Skills and Technology, Julie James AM said:

“Year on year the level of talent at Skills Competition Wales keeps on improving. These events encourage healthy competition and are a great way of recognising the fantastic talent that we have in our country.

“We wish Ryan and all the other finalists and winners the very best of luck, not only in the next round of the competitions, but also in their future careers.”