The best skills competitors in Wales recognised by Deputy Minister

The successes of Welsh learners, students and apprentices who competed in two major skills competitions have been celebrated at special events in Cardiff.

Competitors gathered at the Senedd and City Hall to be honoured for their achievements at Skills Competition Wales and the WorldSkills UK final, which took place at the Skills Show at the NEC in Birmingham last November.

During Skills Competition Wales, the country’s most talented apprentices, employees and learners battled it out in competitions ranging from reflexology to web development, and the highest scoring competitors were awarded bronze, silver and gold medals in their chosen skill.

The WorldSkills UK final, at the NEC in Birmingham saw more than 600 participants from across the UK take part in more than 60 competitions to be named the ‘best in the UK’.

The events in Cardiff saw Deputy Minister for Skills and Technology, Julie James, present certificates of recognition to the 18 young people who have been shortlisted as part of the UK squad.

At the Senedd, competitors were recognised from a range of industries from web design to visual merchandising – including Simon Davies the first Welsh competitor at the Abilympics, a skills competition for people with disabilities and learning difficulties.

Members of the UK squad, along with their families, were also invited to a celebratory lunch at City Hall where WorldSkills champion for Wales, Barry Liles, awarded plaques to the young people and their employers for the support and encouragement they have given to the squad members. 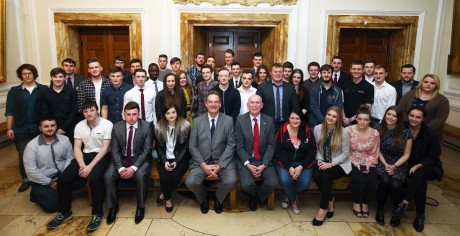 The Deputy Minister said: “These events are the perfect opportunity to recognise the successes of the best Welsh competitors at Skills Competition Wales and the WorldSkills UK final. They’ve all been practising for months and it is important to reflect and celebrate their hard work and determination.

“Skills competitions help to drive up standards in vocational skills and help us to show the world the talent that we have here in Wales. Every single person who was recognised has done so well and will act as role models to inspire young people in Wales.”

Alfie Hopkins, 17 from Llanelli who won a bronze medal in web design at last year’s Skills Show, he said: “I’ve never been to the Senedd before, so to come here with my dad and be recognised for my achievements is really special.

“Today is just the start. It’s really exciting to think that I might go on to represent the UK in Abu Dhabi next year if I make it into the UK team. I’ve met some people who competed at WorldSkills in São Paulo last year and it’s made me more determined than ever.

“There aren’t many courses specifically for web design, so a lot of my skills are self-taught and I practise a lot in my spare time. As part of my training to get into Team UK, I’ll get the chance to learn from industry professionals which will help not only with the competition but also hopefully with future employment.”

Backed by the Welsh Government, through the European Social Fund, Skills Competition Wales promotes the importance of developing a highly-skilled workforce, aiming to boost high level skills in Wales.