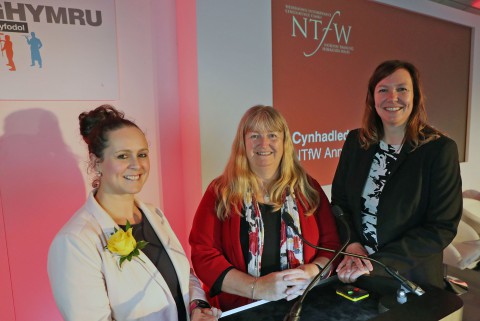 A partnership between every organisation involved in the delivery of work-based skills in Wales is essential for economic success, a major national event in Cardiff was told yesterday (Thursday).

More than 180 delegates, including work-based learning providers and employers from across Wales, attended the National Training Federation for Wales’ (NTfW’s) annual conference, sponsored by Pearson, at the Cardiff City Stadium, which focused on apprenticeship recruitment and workforce upskilling.

Themed ‘Apprenticeships in Wales – The foundation of a future economy’, the event’s mission was to encourage employers and learning providers to work together for the benefit of employees, businesses and the wider Welsh economy.

Julie James, Wales’ Minister for Skills and Science, outlined the priorities set out in the Welsh Government’s Apprenticeships Skills Policy Plan, which included creating 100,000 high quality all age apprenticeships during the current administration.

She said she wanted to create a culture where recruiting an apprentice became the norm and is planning to offer incentives to encourage more small and medium sized businesses to engage with apprenticeships.

She pledged to develop easy to understand and transparent skill pathways by integrating apprenticeships into the wider education system and to address skill shortages in growth sectors and emerging job categories in line with priorities determined by the three Regional Skills Partnerships.

There will be a focus on higher and degree apprenticeships, whilst the effectiveness and relevance of Foundation Apprenticeships will to be monitored.

She stressed that employers were key to successful apprenticeship programmes and she wants them to influence the design of the learning they received.

The Minister also thanked employers and training providers for their commitment to the Welsh Government’s Skills agenda, emphasising the importance of the partnership.

She also referred to the Welsh Government’s plans to reshape employability support.
“We recognise that employability is not just about jobs and skills, but getting every aspect of Government policy – education, health, ¬¬housing, communities – working together to support people into sustainable jobs,” she said.

“The future adult and youth employability programmes will better meet the needs of those requiring support to gain and retain meaningful employment,” she said. “The programmes will be informed by labour market intelligence from the Regional Skills Partnerships and by our continued joint working with Department of Work and Pensions.”

The Welsh Government is determined to streamline employability support to ensure that all the pieces of the jigsaw fit together and fill any gaps. “It’s all about partnership and we can’t do anything unless we all work together,” she added.

The Minister will be announcing full details of the Employability Delivery Plan in July and she stressed that learning providers will have a key role to play in its delivery.

Sarah John, NTfW chair, told delegates about the positive work being undertaken by the network in association with the Welsh Government, including handling apprenticeship enquiries from the Business Wales website.

“The NTFW is now positioning itself as an honest broker, providing advice and guidance to employers and signposting opportunities to providers,” she said. “Within two weeks, we have received enquiries from more than 70 employers, which demonstrates the positive impact we are having, particularly as the Apprenticeship Levy has increased employer awareness of the apprenticeship programme in Wales.”

She revealed that the NTfW is hoping to recruit five extra staff focused on raising awareness of and promoting the apprenticeship programme not just to employers but also to schools and parents across Wales.

A series of three regional information events – in Llandudno on July 11, Llandrindod Wells on July 18 and Cardiff on July 20 – is being organised by the NTfW on behalf of the Welsh Government to inform public sector bodies about the Apprenticeship Levy and how to engage with the apprenticeships.

Sandra Sexton, BT Group’s senior Apprenticeship Programme manager for Wales and UK, who spoke about how the business is using the Apprenticeship Levy to improve skills and increase productivity.