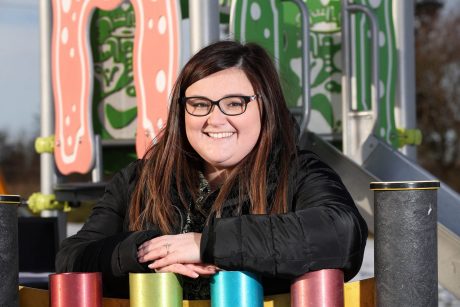 Graduate Sophie Williams’ decision to change career course, after witnessing the beneficial impact of fostering, has been rewarded with the Tomorrow’s Talent award at the prestigious Apprenticeship Awards Cymru 2021.

Sophie, 24, who lives in Hirwaun, was aiming to become a teacher until she experienced fostering first hand when her mum, Lesley, became a foster parent. She saw how children and their biological parents, who are given a chance to get their lives back on track, benefited.

She is now striving to become a qualified social worker, having become an apprentice with Fostering RCT in 2019 leading to a recent promotion to regional recruitment officer.

Responding to the Tomorrow’s Talent award, Sophie said: “It’s amazing to have my hard work recognised. I was nominated for the award by my manager without my knowledge. To be appreciated by your manager is one thing; to win the award is on another level.

“The apprenticeship is definitely the best thing I have done. The learning experience and opportunities I have had through my apprenticeship have been second to none.”

After graduating from Swansea University with a degree in French and Spanish, Sophie had planned to do a Postgraduate Certificate in Education before joining Fostering RCT.

Her work has included liaising with and visiting fostering applicants and compiling life journey books for foster children, giving them an understanding of why they are in care. She has also cared for vulnerable and challenging children within residential services whilst on secondment.

Having completed an Apprenticeship in Business Administration, which was delivered by Coleg y Cymoedd, Sophie hopes to return to university in the future to take a Master’s Degree in Social Work.

“In a short time, she has achieved an incredible amount,” he said. “Without Sophie’s support and willingness to take on any task, we may well have struggled to maintain some of our services during the pandemic.”

Congratulating Sophie, Minister for the Economy, Vaughan Gething, said: “Our award winners have excelled via the Welsh Government’s Apprenticeship and Traineeship programmes and gone the extra mile to achieve success during unprecedented and extremely challenging times.