Apprenticeship Ambassador Tom finds his dream role with the Urdd 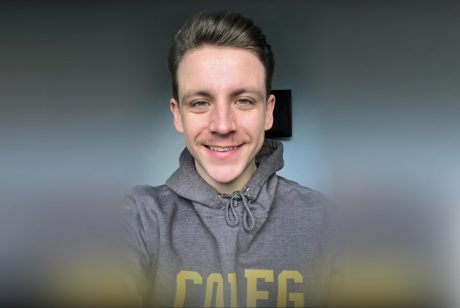 Former Wales international schoolboy athlete Tom Acreman has landed his dream role providing sports activities for schools and communities in the Gwent Valleys and Caerphilly, thanks to an apprenticeship with Urdd Gobaith Cymru.

Tom, 21, from Ystrad Mynach, is currently restricted to coaching children nationally online during the Covid-19 lockdown restrictions as he works towards his Apprenticeship in Sports (Development) with The Urdd. He previously completed a Foundation Apprenticeship in Activity Leadership.

His passion for promoting bilingual apprenticeships has led to his appointment as an Apprenticeship Ambassador by Coleg Cymraeg Cenedlaethol (CCC) and the National Training Federation of Wales (NTfW).

During the recent Apprenticeship Week, he took part in an Instagram takeover campaign, organised by the NTfW and CCC, to promote Welsh language opportunities for apprentices in Wales.

Encouraged by his English speaking parents, Tom completed his primary and secondary education in Welsh. Whilst at school, he represented Wales at cross country and long distance and had under 16 rugby trials for the Dragons.

He left school before sixth form to take a Public Services course in English at Coleg y Cymoedd and then worked at a chemist before being told by a friend about the Urdd apprenticeship opportunity which would allow him to use his sports skills.

“To be honest, it’s a dream job and I’m having so much fun,” said Tom. “I had three weeks’ experience of providing sports activities in schools before the first lockdown, so I’ve had a taste of what it’s going to be like when things get back to normal and I can’t wait.

“I have learned so much over the last year about coaching different types of people and preparing properly for sessions. The online activity sessions provided by the Urdd have helped me to become a better coach.

“The great thing about an apprenticeship is that it builds your skills step by step which increases your confidence and I find it easier to learn.”

Speaking about his passion for the Welsh language and ambassadorial role, he said: “My parents wanted me to go to a Welsh medium school because they thought it would open doors for me in the business world.

“I am proud to be an Apprenticeship Ambassador and want to promote to other young people the opportunities to learn bilingually or through the Welsh language, which is very important to me.”

Catrin Davis, The Urdd’s apprenticeships manager, said Tom had recently won an Urdd Apprentice of the Month award and she described him as a “brilliant ambassador”.

“Tom is one our most engaged apprentices,” she added. “He took part in the Instagram takeover and was involved in other social media activity during Apprenticeship Week.

“Everything we do at The Urdd is working towards the Welsh Government’s target of achieving one million Welsh speakers by 2050. An important part of our work is enabling young people to learn how to adapt their Welsh language skills to a work-based setting.”

Welsh Language Minister Eluned Morgan said: “It is fantastic that apprentices are being given the opportunity to complete their training programme through the medium of Welsh.

“It is important services like these are provided bilingually, as it strengthens the use of the language in day to day life and ensures speaking Welsh remains a valuable skill for employment.

“We have provided funding to support Coleg Cymraeg Cenedlaethol’s Ambassador Scheme and it’s great to see people benefitting from this. I wish the best of luck to apprentices completing their training programmes and hope they enjoy long and successful careers.”