Star employers, inspirational learners and dedicated work-based learning practitioners across Wales have been shortlisted for this year’s prestigious Apprenticeship Awards Cymru on June 17.

The annual celebration of outstanding achievement in training and apprenticeships will see 35 finalists compete in 12 categories for awards at a virtual ceremony.

Highlight of the of the work-based learning calendar, the awards showcase businesses and individuals who have excelled on the Welsh Government’s Apprenticeship and Traineeship Programmes and gone the extra mile to achieve success during these unprecedented times.

The Apprenticeship Awards Cymru are jointly organised by the Welsh Government and the National Training Federation for Wales (NTfW). Openreach, the UK’s digital network business and passionate supporter of apprenticeships, has renewed its headline sponsorship of the awards.

Today, we introduce six successful trainees who are recognised with awards in two categories.

Traineeship Engagement Learner of the Year

Jessica Apps moved half way around the world to begin a new life in Blaenavon with her mum and younger sister in November 2019. Now she has been described as a “superb role model” and is setting her sights on a teaching career.

A Traineeship Creative Engagement Programme with Sgiliau Cyf developed Jessica’s passion for photography and creative writing. She is now studying ‘A’ levels at Coleg Gwent with the ultimate goal of becoming a teacher.

Jessica said: “Joining Sgiliau to do the Traineeship was the best decision I’ve made. After just five months, I found myself so happy and content with my new life and taking the next steps towards my dream job.”

Ross Vincent is on course for a career in the building trade thanks to a Traineeship which sparked his interest in bricklaying.

Ross, 18, who lives in Pembroke Dock, has gone from his Traineeship to secure an apprenticeship with Evan Pritchard Contractors in Haverfordwest, where his father, Carl, is a site manager.

After completing Engagement and Level 1 Traineeships in Brickwork, he is now working towards a Level 2 Diploma in Bricklaying as well as a Foundation Apprenticeship in Groundworks, all at Pembrokeshire College.

Having faced some challenges with a previous course at the college, Ross said he was determined to succeed and secure a career path. 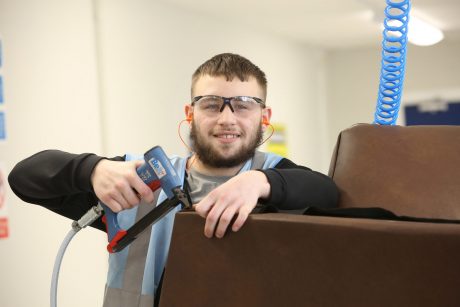 Lewis O’Neill, 17, from Garden City, Deeside, has turned his life around and is looking forward to a career as a furniture upholsterer after being set on the right track by the Welsh Government’s Traineeship Programme.

Lewis has completed Traineeship Engagement and Level 1 Programmes, achieving a City & Guilds Level 1 Extended Award in Employability. Lewis had left school without any qualifications and ended up in the justice system before working with Coleg Cambria.

“I now have a good job with good prospects and hope that my story can inspire someone else,” said Lewis who is working towards a Foundation Apprenticeship in Upholstery.

Keen on a career where he can work with his hands, Lewis is now an apprentice at Westbridge Furniture, having impressed on a work placement.

Traineeship Level 1 Learner of the Year

Thibaud Gailliard could speak little English and had no formal qualifications or previous work experience when he arrived in Wales as a shy 16-year-old, following the loss of his mother to cancer. His learning journey since though has been described as “incredible”.

Luckily, Thibaud, 21, from Ebbw Vale, discovered a Traineeship Engagement Programme in Creative Media delivered by Risca-based training provider Sgiliau Cyf and quickly set about learning English, improving his IT, design and music skills and going on to add a long list of qualifications to his name.

Following the Traineeship, Thibaud progressed to an ICT Users Award Level 1 with Sgiliau who now employ him as lead administrator, as well as a Foundation Apprenticeship in IT. 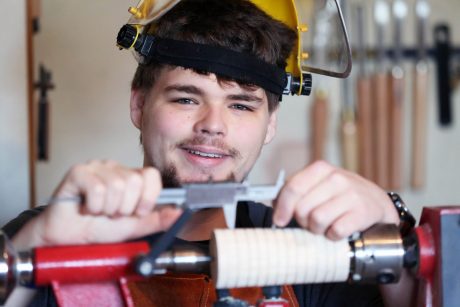 Jamie Hopkins, from Chepstow, a Traineeship Level 1 Learner of the Year finalist.

Jamie Hopkins was severely bullied at school, leaving without any qualifications. Four years later, he rediscovered his love of learning through a traineeship with Itec.

Jamie, 20, from Beachley, near Chepstow, credits his success to the life-changing one-to-one support provided by workshop supervisor John Smith at Itec’s Newport Centre where he achieved a Traineeship Level 1 in Employability Skills.

Hoping to find an apprenticeship with a local business and focused on a career in fine carpentry, Jamie is now working towards a Carpentry Level 1 Diploma at Coleg Gwent, Newport.

John describes Jamie as an “outstanding learner with a bright future.”

Chloe Harvey has been transformed from a shy school leaver into a confident, self-assured employee after beginning her learning journey with the Welsh Government’s Traineeship Programme.

Chloe Harvey, 19, of Monkton, near Pembroke, linked up with learning provider PRP Training Ltd after deciding sixth form studies at school were not for her.

Inspired by achieving a Traineeship Level 1 in Business Administration, Chloe secured a placement with Genpower Ltd, Pembroke Dock where she impressed so much that the company created a new apprenticeship role so that they could employ her.

She has since completed a Foundation Apprenticeship in Business Administration, developing organisational, customer service and IT skills which enabled her to adapt smoothly to working from home during the Covid-19 pandemic. Chloe is now helping to train Genpower’s new recruits.