Meet the apprentices who are Apprenticeship Awards Cymru finalists

Star employers, inspirational learners and dedicated work-based learning practitioners across Wales have been shortlisted for this year’s prestigious Apprenticeship Awards Cymru on June 17.

The annual celebration of outstanding achievement in training and apprenticeships will see 35 finalists compete in 12 categories for awards at a virtual ceremony.

Highlight of the of the work-based learning calendar, the awards showcase businesses and individuals who have excelled on the Welsh Government’s Apprenticeship and Traineeship Programmes and gone the extra mile to achieve success during these unprecedented times.

The Apprenticeship Awards Cymru are jointly organised by the Welsh Government and the National Training Federation for Wales (NTfW). Openreach, the UK’s digital network business and passionate supporter of apprenticeships, has renewed its headline sponsorship of the awards.

Today, we introduce successful apprentices who are recognised with awards in four categories.

Foundation Apprentice of the Year

A willingness to learn new skills and take on more responsibility in challenging circumstances has helped Bethany Mason to develop into an excellent bereavement services officer.

Since joining Rhondda Cynon Taf County Borough Council as a shy apprentice in 2016, Bethany, 21, has risen to a series of difficult challenges, making a huge difference to the staff of Glyntaff Crematorium at Glyntaff, Pontypridd and the grieving families they work with.

She has achieved a Foundation Apprenticeship and is now close to completing an NVQ level 3 in Business Administration, both delivered by Coleg y Cymoedd.

Bethany, from Llantrisant, has also developed leadership skills, digitised and centralised burial records and cemetery plans for RCT Cemeteries and introduced digital music for family cremation services, together with webcasts and visual tributes. 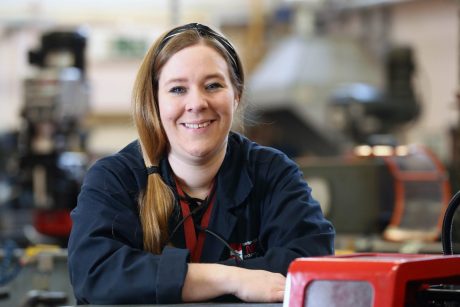 Stevie Williams from NPTC Group of Colleges is a Foundation Apprentice of the Year finalist.

Stevie Williams has swapped her job in customer services to pursue her dream career teaching engineering.

Now working towards an Apprenticeship and VRQ Level 3, Stevie plans to progress to a Postgraduate Certificate in Education and Degree Apprenticeship to realise her ambition of becoming an engineering lecturer. She is completing her apprenticeships with Pathways Training.

Apprentice and musician Joel Mallison has struck the right note with a career change, excelling as an apprentice with telecommunications company Openreach.

After initially studying music and graduating with a distinction in Radio Production, Joel, 30, from Abergavenny, worked in his father’s painting and decorating business for six years before seeking a new career.

An interest in telecommunications led Joel to Openreach where he completed a Foundation Apprenticeship in IT Software Web and Telecoms Professionals last September. The apprenticeship was delivered by Openreach and supported by ALS Training, Cardiff.

Apprentice of the Year

Apprentice William Davies has saved his employer £20,000 a year by automating a product assembly system.

His other achievements to date include commissioning a new Rapid Prototyping 3D printer to assist in autonomous vehicle systems development, implementing Health and Safety and productivity improvements and managing a project to renovate and ensure a canteen is Covid-secure.

William achieved an Apprenticeship in Engineering Manufacture (Engineering Technical Support) six months ahead of schedule at Coleg y Cymoedd where he attained two awards. He is now working towards a Level 4 HNC in Mechanical Engineering at Bridgend College.

Just imagine the buzz of being asked to create and help manage the social media content for an iconic BBC television series at the age of 19.

Owain Carbis from Cardiff, an Apprentice of the Year finalist.

That’s exactly what happened to talented Owain Carbis, of Thornhill, Cardiff, during his apprenticeship with the digital and marketing department at BBC Cymru Wales.

For Owain, who is now working freelance, it was a dream come true, as he’s an avid Doctor Who fan. His work, which was seen by a worldwide audience of millions, was highly praised by senior colleagues at the BBC.

Owain’s Apprenticeship in Creative and Digital Media was delivered through the medium of Welsh by Sgil Cymru.

Owen Lloyd has a mission to become the best civil engineer possible, working to provide flooding solutions for the people of Rhondda Cynon Taf.

He completed a Level 3 BTEC in Construction and the Built Environment (Civil Engineering) course with distinction at Bridgend College, ultimately aiming to qualify as a Chartered Civil Engineer.

Higher Apprentice of the Year

Natalie Morgan returned to Wales to pursue a career in sport, securing a job with Welsh Gymnastics, after working within the performing arts sector for several years in London.

She went on to successfully complete a Higher Apprenticeship (Level 4) in Leadership and Management with Cardiff-based Portal Training and has now progressed to Level 5.

Using the skills she learnt during her apprenticeship, Natalie, 33, from Penarth, was able to lead a successful outreach project to engage young girls and women from the Black, Asian and Minority Ethnic community in gymnastics.

Launched with 11 girls, the Cardiff club grew to more than 130, increasing numbers by 98% in just 18 months. 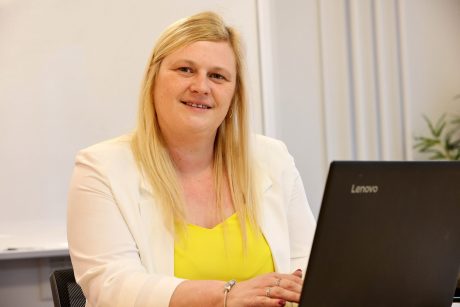 Rhyanne Rowlands from Women’s Aid RCT, a Higher Apprentice of the Year finalist.

A domestic abuse victim herself earlier in her life, Rhyanne, 38, from Aberdare, started as a volunteer for Women’s Aid in 2016 and is now the Safer Rhondda development officer.

Rhyanne set up and ran the Athena project to support women over the age of 50, which won the Cwm Taf Crystal Trophy Award in 2018.

Ciara Lynch is making a name for herself in the construction and civil engineering sector, thanks to her outstanding work as an assistant technician with Swansea Council.

Ciara, 22, from Morriston, has achieved a HNC in Construction and the Built Environment and a Higher Apprenticeship Level 4 in Construction Site Supervision at Bridgend College.

A science, technology, engineering, and mathematics (STEM) ambassador, Ciara is keen to promote the benefits of an apprenticeship, highlighting opportunities for women in an industry that actively encourages diversity.

Graduate Sophie Williams was destined for a teaching career until she witnessed the positive impact that fostering has on children and their biological parents, who are given a chance to get their lives back on track.

After experiencing fostering first hand when her mum, Lesley, became a foster parent, Sophie decided to strive to become a qualified social worker.

Having completed an Apprenticeship in Business Administration with Fostering RCT, Sophie has recently been promoted to regional recruitment officer, aiming for a Master’s Degree in Social Work in the future. Her apprenticeship provider was Coleg y Cymoedd.

“My apprenticeship has given me the chance to gain full-time employment, get qualified and to see the many different aspects of social work,” she said. 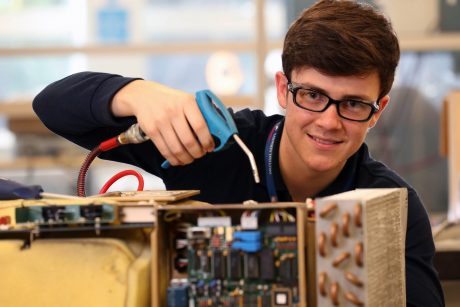 Connor, 21, who lives in Llantrisant, was determined to pursue a career in engineering, enrolling on a full-time engineering course at Coleg y Cymoedd whilst continuing to work part-time at a nursery.

His commitment paid off, completing a BTEC Enhanced Engineering qualification with a distinction and winning the college’s Engineering Apprentice of the Year Award.

Connor joined BAAE in 2018 and is due to complete his apprenticeship as an avionic engineer this August, hoping to progress to a HNC.

Ryan Harris has proved to be an “impressive” apprentice, inspiring future engineers and helping his employer to improve efficiency and diagnose and fix faults.

During his apprenticeship, Ryan has saved the company thousands of pounds, modifying machines to save energy and improving the ordering and storing processes for low volume production.

Having achieved a series of engineering qualifications through Coleg y Cymoedd, including an Apprenticeship in Installation and Commissioning, Ryan is now working towards a Pearson Mechanical HNC delivered by Bridgend College.