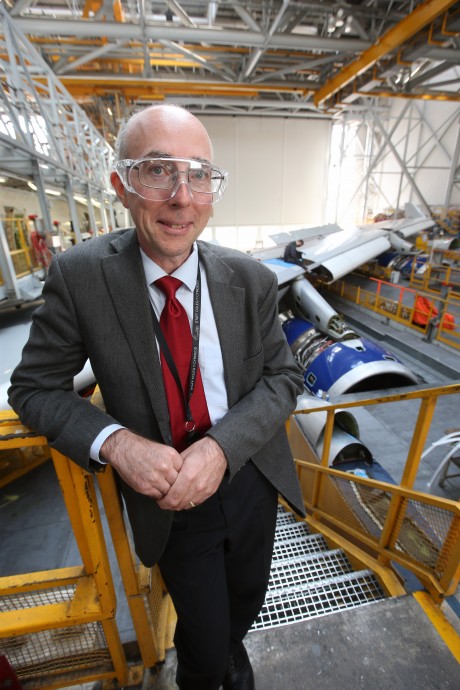 Engineering assessor Steve Manning is in contention for an award at the Apprenticeship Awards Cymru 2015 after showing incredible commitment to his students through his battle with cancer.

Steve, 53, from Llantwit Major, is one of the four finalists shortlisted in the Work-Based Learning Practitioner of the Year category at the high profile awards ceremony to be held at the Celtic Manor Resort, Newport on Thursday, October 29.

Steve works for Coleg Y Cymoedd as an engineering assessor, supporting more than 40 apprentices across British Airways sites in Cardiff, Blackwood and Llantrisant, as well as Arriva Trains in Cardiff.

He joined the college in Ystrad Mynach in October 2013, having spent most of working life with the RAF as an aircraft engineer and later, Cardiff City Bus.
Then, in July 2014, he had to go through major surgery, followed by months of chemotherapy.

“The chemotherapy really drained me and I felt sick a lot of the time but it was important to me not to let my apprentices down,” said Steve, who is now well and back at work. “I had an incredible amount of support from students and colleagues, which really helped me through it.”

Matthew Tucker, head of school at Coleg Y Cymoedd, who nominated Stephen for the award, said: “He’s never lost focus of his learners and has astounded us with his relentless positive attitude and motivation.”

Zoe Batten, an MA Engineering Apprentice with British Airways, said: “During his illness he was still putting his students first. He ensured that he could always be reached by email to answer any questions or concerns, kept in touch with all students and also marked work.”

Deputy Minister for Skills and Technology Julie James congratulated Sreve and the other 36 award finalists. “We have some truly exceptional apprentices and learners here in Wales and the Apprenticeship Awards Cymru provide a perfect platform for us to celebrate their hard work and achievements,” she said.

“Equally important are the training providers, employers and practitioners who go the extra mile to support their apprentices. Developing skilled young people is vital for our economy. The Welsh Government is committed to training programmes such as Apprenticeships but investment must be a shared responsibility with the education sector, businesses and individuals.”