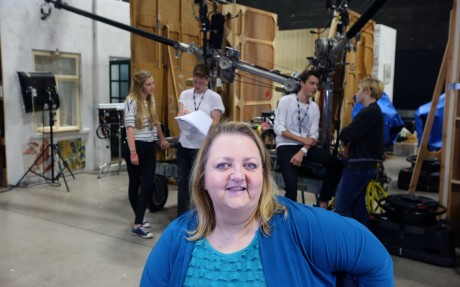 A woman who supports learners in a variety of roles – from carpenters with the opera, to costume dressers on popular TV series Casualty, editors on Doctor Who and runners on Hinterland – is in contention to win a major award at the Apprenticeship Awards Cymru 2015.

Sue Jeffries, chief executive of Cyfle, the training company for the creative industries, is one of the four finalists shortlisted in the Work-Based Learning Practitioner of the Year category at the high profile awards ceremony to be held at the Celtic Manor Resort, Newport on Thursday, October 29.

“My passion is to ensure that the industry in Wales gets the most talented people and to do this they must be trained in the right way,” said Sue, who joined Cyfle, which has centres in Caernarfon and Cardiff, in 2013 after over 30 years working in the media.

“I’m very proud 13 of the 17 young people who completed the Apprenticeship in Creative and Digital Media in 2013/14 have continued to work in the media, whilst another three have gone on to further learning and another to a job outside the industry. It’s a joy to go onto set to see former trainees making their own valued contribution.”

One of her Apprentices, Matthew Ingram, said: “She shares her experience with warmth and wit and we always look forward to a session with Sue. Her passion for the creative industries in Wales is undeniable.”

Sue, from Barry, believes in leading by example, so since 2013, when Cyfle started to train apprentices, the company has also employed apprentices as part of its team.

Cyfle provides training to Cardiff’s multi-award winning special effects company Real SFX, amongst others, which specialises in fire, explosives and soft props for TV and film. Its director, Carmela Carrubba, said: “Sue is a mentor to our apprentices and our business, and continually encourages new talent to join the industry.”

Deputy Minister for Skills and Technology Julie James congratulated Sue and the other 36 award finalists. “We have some truly exceptional apprentices and learners here in Wales and the Apprenticeship Awards Cymru provide a perfect platform for us to celebrate their hard work and achievements,” she said.

“Equally important are the training providers, employers and practitioners who go the extra mile to support their apprentices. Developing skilled young people is vital for our economy. The Welsh Government is committed to training programmes such as Apprenticeships but investment must be a shared responsibility with the education sector, businesses and individuals.”