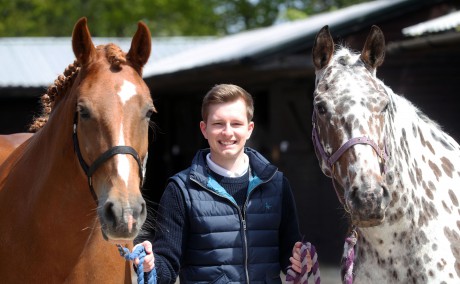 Mitchell Rees a finalist for the VQ Learner of the Year (Higher) award.

A dozen finalists from across Wales will discover on Tuesday evening (June 6) if they have won one of this year’s Vocational Qualification (VQ) Awards, which celebrate those who use technical, practical and vocational qualifications to achieve success.

They will be competing for coveted awards in four categories at a ceremony to be held at St David’s Hotel, Cardiff on the eve of VQ Day on June 7.

The VQ Learner Awards recognise learners who clearly demonstrate progression and excellence in vocational studies and have made considerable achievements in their field.

The VQ Learner of the Year (Intermediate) finalists – for learners with qualifications up to level three – are:

Alys Evans, 18, of Gilfach Goch, is working towards a level three qualification in Patisserie and Confectionery at Coleg y Cymoedd, Nantgarw and dreams of running her own mobile cake and cupcakes business alongside a cake shop and bakery. She won a series of gold, silver and bronze awards at the Welsh International Culinary Championships, received a gold City & Guilds medal for outstanding achievement and a gold at Cake International in London.

Jason Hyam, 34, of Cardiff, from Arthur J. Gallagher, Llantrisant, was nominated by Acorn Learning Solutions. Following the completion of his apprenticeship in Providing Financial Services, he has been promoted from accounts executive to a business manager role in commercial insurance brokerage and is studying for a Diploma in Insurance.

Maria Brooks, 29, from Ford Motor Company, Bridgend, who was nominated by Bridgend College, is going for the double, having been named Apprentice of the Year at last year’s Apprenticeship Awards. She joined Ford Motor Company in 2011 having struggled to develop a career in her degree subject of forensic chemistry. She is due to complete an Electrical Maintenance Apprenticeship in August, while at the same time undertaking a BEng in Manufacturing Systems Engineering degree and an HNC in Electrical Engineering with Bridgend College.

The VQ Learner of the Year (Higher) finalists – for qualifications from level four upwards – are:

Christine Thomas has worked for Newport City Council’s waste management department for 27 years, progressing from junior clerk to enforcement and trade manager. She has completed an Apprenticeship and Higher Apprenticeship in Systems and Operational Management with training provider Safe and Secure Training and become an assessor. Her enthusiasm for training has seen several colleagues sign up for apprenticeships.

Julie Mundy from Seren Cyf, Blaenau Ffestiniog, has turned redundancy into a rewarding new career opportunity with a North Wales charity that supports adults with learning disabilities. She is team leader of the furniture recycling unit at Seren Cyf and her passion for lifelong learning has seen her complete a Higher Apprenticeship (Level 4) in Systems and Operations Management delivered by Cambrian Training Company.

Mitchell Rees, 21, from Merthyr Tydfil, who was nominated by Bridgend College, “broke the mould” when it came to studying at higher education and entering the equestrian world. Instead of following the A-level route, he focused on vocational education, studying for equestrian qualifications at Further and Higher Education. Having achieved a Level 3 Extended Diploma in Horse Management and a HND Equine Studies, he is now a PGCE student.

Finalists for the VQ Trainer of the Year Award, which recognises individual trainers who have made a telling contribution to supporting learners in the workplace to achieve excellence whilst also constantly improving their own skills and knowledge, are:

Gwenno Jones, 28, from Portal Training, Cardiff, is focused on supporting and challenging learners to reach their potential. The former head of physics at a secondary school is now inspiring others to learn as a trainer of higher level apprenticeships in Leadership and Management.

Lisa Winter, of insurance brokerage and risk management company Arthur J. Gallagher in Llantrisant, was nominated by Acorn Learning Solutions, Newport. 98% of her learners achieved their full framework in 2015-’16 and, in the last year, she has achieved four qualifications, including the CII Level 4 Diploma and Internal Quality Assurance Level 4 Award.

Finalists in the VQ Employer of the Year Award category, which focuses on employers who promote the value of vocational qualifications in the workplace and make a real contribution to improving the skills and national competitiveness, are:

Arthur J. Gallagher, Llantrisant was nominated by Acorn Learning Solutions, Newport. Major growth at this award-winning insurance brokerage and risk management company over the past five years has been underpinned by an Apprenticeship programme. Seventy-five employees have completed Apprenticeships during the period and another 37 are currently working towards qualifications. Revenue has grown from £3.56 million in 2012 to £8.4m and staffing has boomed from 68 to 155 in Llantrisant, Cardiff, Newport and Talbot Green.

Electroimpact UK Ltd, Hawarden was nominated by Coleg Cambria. Since this aerospace engineering company fully immersed itself in vocational qualifications four years ago, it has seen substantial growth, which it attributes directly to the training of its employees. The company’s workshop has increased by 50 per cent more than it had originally planned. Apprentices have won gold, silver and bronze awards in WorldSkills competitions and a medallion of excellence at EuroSkills.

Mainetti, Wrexham was nominated by Cambrian Training Company. Launching an Apprenticeship programme at this recycling company four years ago has improved productivity and workforce morale and reduced staff turnover. The company’s multi-national workforce of 230 recycles and redistributes garment hangers for major retailers. Productivity has increased 20 per cent since the company began its Apprenticeship programme.

Now in their 10th consecutive year, the awards coincide with VQ Day on June 7, a celebration of vocational qualifications for learners, teachers, training providers and employers. The College Merthyr Tydfil is organising activities and learning providers across Wales are taking part in a social media campaign to celebrate VQ Day and engage with learners of all ages.

Minister for Skills and Science, Julie James: “VQ Day celebrates vocational qualifications that give learners a foot in the door to the industry they want to work in and can prepare them for vocational study or university. The training must reflect and respond to the needs of industry if it is to benefit employees and the businesses they work for.

“A strong business sector, a strong economy and strong employers are critical to a strong vocational educational sector. Therefore, VQ Day and these awards are all about recognising the sector and the opportunity to engage with learners of all ages.

“Vocational qualifications have never been more important to the economy and the individual, as they deliver the trained, talented employees that businesses are crying out for and ensure individuals have the skills needed to succeed in education and work.”