WorldSkills success for Cardiff and Vale College at the Skills Show 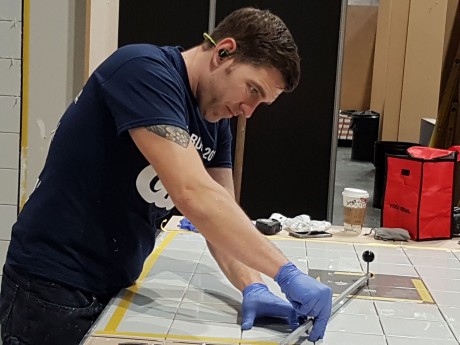 Cardiff and Vale College students are among the very best in the UK following a string of success in the WorldSkills UK finals.

One won a gold medal and two have been chosen to represent Great Britain in WorldSkills Kazan 2018.

More than 450 young people took part in competitions covering 56 different skills from construction to hospitality over three days at the Skills Show in Birmingham in front of thousands of visitors.

Anthony, a CAVC Vocational Access student, had to instruct a client who had just started at a gym, demonstrating how to use equipment such as the treadmill and show awareness of health and safety guidelines. He then had a skills test.

“I enjoyed it, to be honest. I was just ready – I’d prepped for three days beforehand and I was just buzzing to get on with it. I was nervous, but you get nervous at every competition. My coach Rich [CAVC Strength and Conditioning Coach Rich Walters] really helped me; he explained everything I had to do so that it made more sense.

“I’m very proud and I like the gold medal – it’s very nice and it’s going to look good on my CV as well.

Anthony, who has played for Pentyrch RFC and now plays for Cardiff Blues U18s, wants to follow in his father’s footsteps as a rugby player.

“I like my rugby and I’m doing pretty well – I’ve got into the Blues,” Anthony explained. “I see being a personal trainer as a backup so I’ve got something to fall back on if my rugby career doesn’t do too well.

“I was basically brought up on rugby from my dad he used to play at county level and he introduced me to Pentyrch. When I joined Cardiff and Vale College [Rugby Academy Director] Martyn Fowler and the other coaches got me in the Blues. Hopefully I will get a contract and carry on playing for the Blues and eventually for Wales – I would love that. I would say that I would not be where I am if it wasn’t for Cardiff and Vale College.

Meanwhile, Connor Lewis won bronze in the WorldSkills Electrical Installation, a competition in which his brother Tom also took part. The 20-year-old twins have been selected for the British squad to go to WorldSkills Kazan 2019. Both Connor and Tom are apprentices with the College and were supported by their employer Blues Electrical.

James Ackland also won bronze for Wall and Floor Tiling while his fellow student Maziyar Pazouki was highly commended. In the Automotive Refinishing category, Cory Maher – an apprentice with Remit – won the Institute of the Motor Industry’s Bonnet Design competition. Cory was supported by his employer Trade Centre Wales.

“I didn’t think I was going to win – you could do literally whatever you liked so I did some basic, easy stripes and won,” Cory said. “I didn’t enjoy it at first – I was petrified! After a while the nerves dropped away and I really got into it, though.

“The Skills Show was great and it was good to meet new people. The hardest part was settling down and getting on with it.”