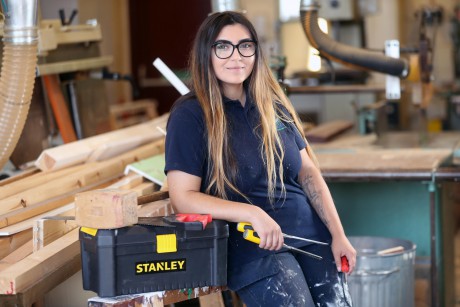 A young South Wales woman has demonstrated that future career prospects are not necessarily defined by school examination success.

Stella Vasiliou, 19, from Barry, is crafting a promising career as a carpenter with The Vale of Glamorgan Council having initially explored other learning avenues.

Rewarding her learning journey, Stella has been shortlisted for this year’s Apprenticeship Awards Cymru. She will be competing to become Traineeship Learner of the Year (Level 1) at the prestigious awards ceremony at the Celtic Manor Resort, Newport on November 9.

Leaving school with Cooking and 3D Art qualifications, Stella was encouraged to study art and design at Cardiff and Vale College but, after a year of study, decided the course was not for her.

Through training provider ACT Limited, she discovered a range of career options that she previously didn’t know existed, as well as a passion for construction which stemmed from helping her father, an electrician, during school holidays.

Determined to succeed in a male dominated sector, Stella completed a Level 1 Traineeship in Construction within just seven months. She made such a good impression during a work placement at The Vale of Glamorgan Council that she was offered an Apprenticeship in Carpentry, delivered by Cardiff and Vale College.

“Stella is a talented young lady who has become a valued member of the team,” said her manager, Glyn Davies. “She’s willing to learn, eager, punctual, dedicated and has brought something to the team with her drive and energy.”

Stella said: “I have worked extremely hard to get to where I am. Yes, I have taken a bit of a diversion to get here, but I wouldn’t change it. I have finally found something that I enjoy and I’m good at and I would like to prove to others who are leaving school that grades aren’t everything. You can be successful in other ways.”

Jayne McGill-Harris, ACT Limited’s senior marketing and PR manager, described Stella as “a real inspiration” who has a wise head on young shoulders.

Congratulating Stella on being shortlisted for an award, Minister for Welsh Language and Lifelong Learning, Eluned Morgan said: “Apprenticeship Awards Cymru showcase the success of the Welsh Government’s Apprenticeships and Traineeships Programmes and the achievements of our star apprentices, employers, learning providers and trainees.
“Apprenticeships are a great way for individuals to gain valuable skills and experience while earning a wage and for employers to ensure their workforce has the skills to future proof a business.
“Increasing higher level skills and developing skills pathways that benefit the whole of Wales have never been more important.”